On May 17th and 18th, 2008 at the Rowell Ranch Rodeo in Castro Valley, California, SHARK’s video cameras rolled as rodeo personnel secretly shocked the horses with 5,000 volts of painful electricity in an attempt to make these grand animals appear rank and wild.

The Rowell Ranch Rodeo Park is owned and managed by the Hayward Area Recreation and Park District (HARD). HARD rents the rodeo arena out to these so-called cowboys who have signed a contract that very clearly states, “No animal shall be beaten, or cruelly prodded, nor shall any electric prod or similar device be used.”

SHARK’s videotape clearly shows horses were being shocked in the neck area while in the chute. Not only are these criminals breaking HARD’s rules, but California State laws as well. 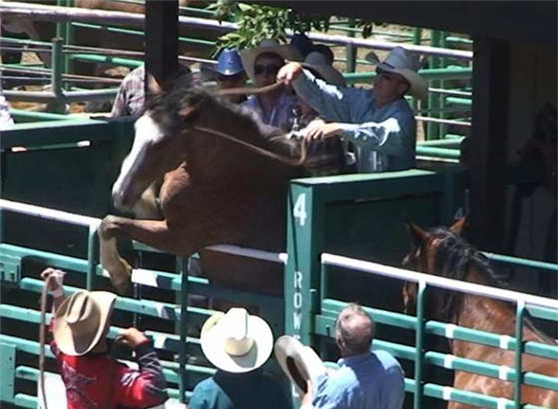 This horse doesn't want any part of the "entertainment" at the Rowell Ranch Rodeo.

UPDATE! Rosser fined $2500.00 for his illegal use of electrical prods. Read the story here.

The rodeo management shall ensure that no electric prod or similar device is used on any animal once the animal is in the holding chute, unless necessary to protect the participants and spectators of the rodeo.”

The horses that were shocked were not posing a danger to anybody. They were shocked for one reason and one reason only, to make a tame horse appear wild. Watch the video as one of the horses calmly stands there despite being punched in the head. The horse's complacent reaction results in a painful shocking. The only people creating a dangerous situation here are the trigger-happy cowboys abusing the horses.

In some of these scenes in SHARK's video on the left you see two men behind the bucking horse, and one in front on horseback. The man on horseback is Cotton Rosser, owner of the Flying U rodeo company. The rodeo clown in the green shirt is Seth Ryan "Shorty" Gorham. Mr. Gorham is using an electric prod to shoot the bucking horse with over 5,000 volts of painful electricity. The prod has the desired effect, and the horse bucks.

Besides being obviously cruel, shocking rodeo animals to make them "perform" is illegal in California, where this rodeo was shot. Both Mr. Rosser and Mr. Gorham know it. That's why Mr. Gorham tries to hide it. The question is -- why does Cotton Rosser do nothing about it? Because, Mr. Rosser's rodeos are often filmed shocking animals. And, like father like son, Reno Rosser (Cotton Rosser's son) has also been filmed illegally shocking animals.

Abusers in the rodeo industry are generally serial offenders and, as expected, this isn’t the first time SHARK has documented Cotten Rosser, the stock contractor at this rodeo, shocking animals. In fact, Cotton Rosser is so infamous for his extensive and brutal use of electricity to make animals perform that the media has dubbed him "The Electric Horseman".

Russell Hackler, DVM was listed in the program as the on-site vet for the Rowell Rodeo. Russell Hackler has been cited by the California Veterinary Medical Board, and he appeared to have his license revoked and then his revocation was stayed pending the completion of five years of probation. The violations included: “Self use of controlled drugs”, “Unsanitary conditions”, and “Failure to meet minimum standards”.

The California Penal Code, section 596.7(2) requires the veterinarian(s) at professional rodeos, either as an attending or on-call veterinarian, to submit a written report to the Veterinary Medical Board within 48 hours of the conclusion of the rodeo.

To this point, years after the rodeo, rodeo vet Hackler has filed no report--written or verbal--concerning the animals that were injured at the Rowell Rodeo. Not only a violation of the state law, but par for course in terms of the rodeo industry's refusal to release information concerning their injured victims.

The sticker below is from a rodeo attendee's car at the Rowell Ranch Rodeo. Seems in addition to terrorizing animals at the rodeo, some folks don't have a problem with expanding this behavior out of the arena.

Hackler appears to be yet another example of the caliber of vet that rodeos employ to "care" for their arena animals. SHARK exposed another vet of questionable character on the committee for the National Western Stock Show and Rodeo in January 2008. Denver rodeo vet, Dr. John Maulsby proved to be more than a liar and the worst kind of animal betrayer.

Hackler also claims to belong to the National Animal Interest Alliance (NAIA). The NAIA is a corporate animal (ab)use group masquerading as an animal welfare organization. This group is nothing but a thinly veiled front organization that attempts to keep the money generated from animal abusing industries flowing into the pockets of the abusers.

Cindy Schonholtz is the Vice President of the NAIA and also happens to be the “Animal Welfare Director” for the Professional Rodeo Cowboys Association (PRCA). Amazingly, the NAIA even supports the killing of horses for food “when [the horse] no longer meet the owner's needs”.

With friends like these, the animals certainly don’t need any enemies.

With so many laws and rules blatantly broken this story hasn’t even begun to unfold yet. HARD is now conducting an investigation regarding violations of the Rowell Ranch Rodeo Park rules. Additionally, Alameda Animal Control is investigating this case and may pursue criminal charges against those responsible.

Stay tuned as SHARK continues to try and bring some justice for these abused rodeo animals.

Learn more about the cruelty and corruption of the rodeo industry at RodeoCruelty.com.