California Rodeo in Salinas Continues its Many Abusive Ways

SHARK has been extraordinarily busy in the past month fighting against rodeos, as we had teams at both the 2014 California Salinas Rodeo and Cheyenne Frontier Days Rodeo. SHARK spent literally hundreds of hours at these rodeos, and we were there because of the abuse and cruel treatment of the victimized animals.
California Rodeo in Salinas
California has a law requiring that veterinarians must report all rodeo animal injuries requiring treatment. Sounds like a great law, right? Unfortunately, the law is being used instead to give rodeos cover for abuse.

The veterinarian for the California Rodeo in Salinas, California has reported just one animal injury for the annual four-day event last July. Unfortunately for him, SHARK investigators were at every performance, and they filmed at least nineteen obvious animal injuries. We will release a video showing those animals in the next few days. 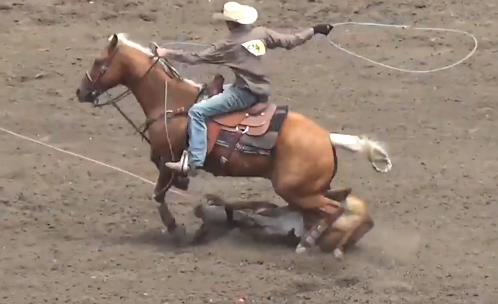 A steer that was trampled and injured at the Salinas Rodeo

So the law designed to expose the number of animals injured in rodeos is being used instead to make an official, though false record that suits animal abusers. Phony records for phony cowboys. I have to admit, there is an ironic symmetry to it.

You may recall that we exposed that bulls were sprayed with hairspray as an adhesive for glitter at the Salinas Rodeo last year. We challenged the SPCA for Monterey County to file citations. The SPCA refused.

While we were disgusted at this inaction, we hoped that the SPCA, which apparently has a suspiciously close relationship with the rodeo would at least quietly put a stop to future abuses of this type. Our hope was misplaced, as this year bulls were again sprayed and had glitter dumped on them.

An email has been sent to SPCA of Monterey County Executive Director Gary Tiscornia asking if there was even an effort to stop this idiocy. We’ll share his response with you if there is one.

Additional to the animal abuse, the Salinas Rodeo wasted untold tens of thousands of gallons of water spraying down its track, arena and other areas of the property to eliminate dust. California is in the grips of a crippling drought. Water use is being curtailed statewide, but the rodeo is wasting water as if there is no drought whatsoever. We will file a complaint with the appropriate California authorities, and will inform you of any response. 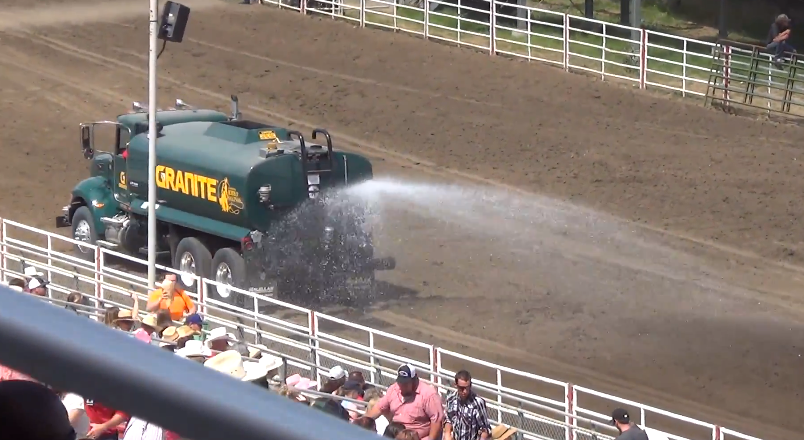 One of three 5,500 gallon water trucks that wasted tens of thousands of gallons of water at the Salinas rodeo
The rodeo also had a drone that was flying over the crowd - a safety hazard and violation of the Federal Aviation Administration’s rules against the commercial use of drones. We have filed a complaint with the FAA, and will inform you of any response. 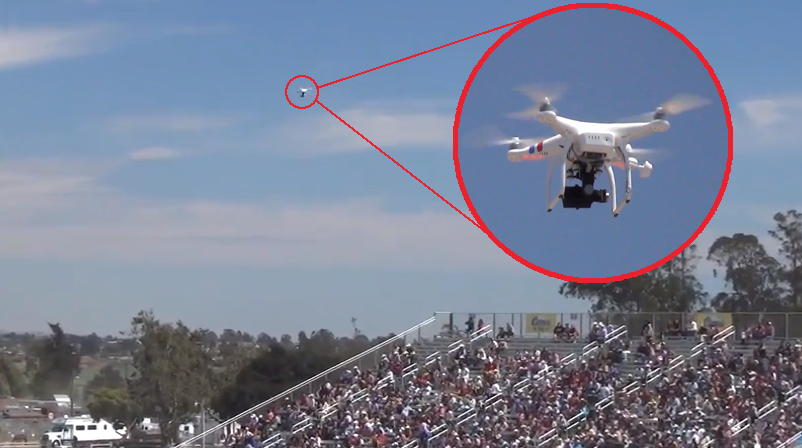 The drone that was illegally flying over the arena
We will be reporting more about the Salinas Rodeo and the SPCA of Monterey County in the coming days and weeks. It is California’s largest rodeo, and it is outrageously cruel, especially considering it is in a state that claims to be progressive.

This year at the Cheyenne Frontier Days Rodeo (CFD) we caught brutal animal cruelty including rodeo thugs electro-shocking horses, which violated the CFD’s own rules. 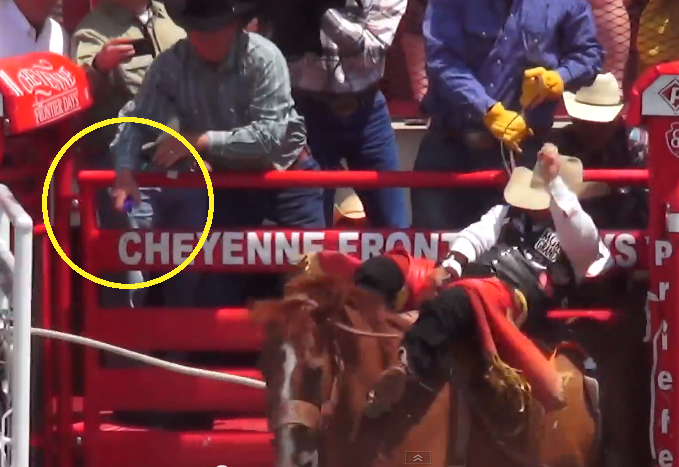 Our video of the shocking was so strong, that the very pro-rodeo newspaper, the Wyoming Tribune Eagle (WTE), issued a scathing editorial against the rodeo:
"CFD officials promised in 2008 that they would no longer shock horses to get them to perform. The WTE caught them red-handed using Hot-Shots on roughstock and did an article that embarrassed the organization nationally. Policies were passed. Rules put in place.

Afterward, rodeo officials begged this newspaper to do stories about how well they tended their animals. They swore they were as much about the horses, calves, steers and bulls as they were about the money and the cowboys.

We ran those articles, catching holy heck from the animal rights crowd in the process. But it seemed like the fair thing to do.

Someone representing CFD got caught again on July 18 shocking saddle broncs and barebacks on their faces during the CINCH Rodeo Shootout. Videos from SHARK (Showing Animals Respect and Kindness) clearly show it; there was no way to pass the charge off as the rantings of some out-of-control animal rights group."
It was no small matter for the WTE to publish this, and they would not have without our evidence. Out three-person team spent literally hundreds of hours at CFD and this shows the importance of our investigator’s work. 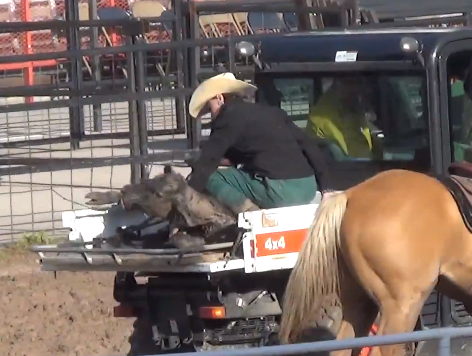 An injured calf struggles as she is carted out of the rodeo arena
Unfortunately, one rodeo supporter was angered by our exposing the shocking and decided to take his rage out on our two female investigators.  You can see that video HERE. The newspaper put this coward’s face on their front page and SHARK even offered a reward for his name, but this guy appears to have run away as fast as he could. As we said, coward. 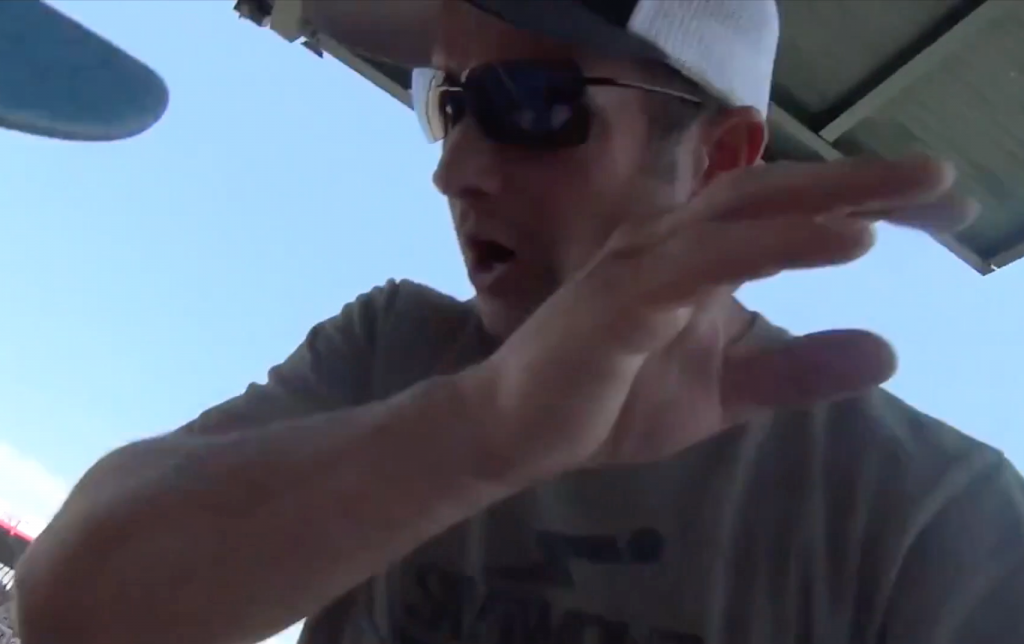 We will be release more videos in the near future exposing the abuse of animals at CFD. You can read the press releases we issued along with more videos of cruelty on THIS link.