Comcast Pulls SHARK’s TV AD For Being Too Graphic - After They Approved It!

Even before it aired, the ad garnered great attention for this important cause, including inspiring two newspapers to publish editorials against pigeon shooting.
Click the picture to watch the ad: 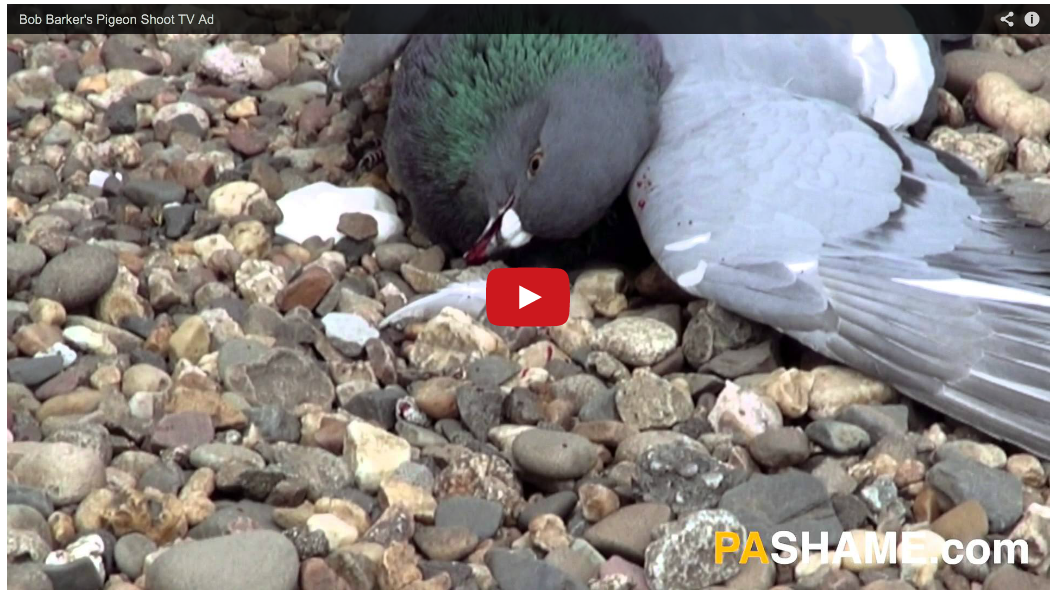 The ad had been submitted to Comcast Cable in Harrisburg, where the initial commercials were going to run before airing statewide.  Comcast approved it and we had a schedule in hand, and then hours after it aired on networks such as CNN and FOX News, Comcast pulled the ad off the air!

They claimed the ad was too graphic for CNN and Animal Planet, and that FOX and MSNBC would only run it after 9 PM. Of course it’s graphic - it shows the bloody reality of what pigeon shooting is, but they approved it, which is why we held that press conference.

Unfortunately, running it in prime time, the only time they will allow, is going to almost double the cost per ad. To make matters more difficult, we only have a limited time that the PA State Senate is going to be in session before the year ends, meaning we need to get this ad up and running again ASAP if we want to be able to have an effect.

SHARK has committed to this effort, so we are paying the higher price to get the ads back on the air but that doesn’t mean we are going to take this sitting down. We sent out a press release about Comcast pulling the ad.
Read the articles covering this story:
Comcast cuts showings of anti-pigeon shooting commercial featuring Barker

Pigeon shoot commercial deemed too graphic, scrapped by Comcast
We want to thank all of you who have already supported this ad campaign and donated to get the ad on in even more television markets in PA. With the ad cost now doubling, we need even more help if we want to have the greatest impact we can, and to fight against the NRA who is fighting with all their power to keep these vile events alive and well. Please make a donation to get more ads on the air HERE.

Please also politely email and call Senate Majority leader Dominic Pileggi and ask him to bring the bill to a vote:
EMAIL
Phone:  717-787-4712
The editorials against pigeon shoots:

Time for the Legislature to stop these slaughters

End the slaughter: Unsporting pigeon shoots should be outlawed


News coverage of the Ad: