Recently, I blogged on the Underbelly of Rodeos: Busting the American Myth and feel the need for an update as here we are in early August, and already the horrific occurrences of abuse, injuries and deaths are significant. I've read a lot about "freak accidents" at rodeos, and how shocked and horrified rodeo people are when... sigh... that gosh darn animal got his neck snapped -- who would have thought roping a calf or steer around his neck and violently jerking him off his feet may break his neck! Certainly, it would appear not the "cowboys" who have caused it and seen it happen time and time again, and yet still remain bemused by the apparent "freak accident." 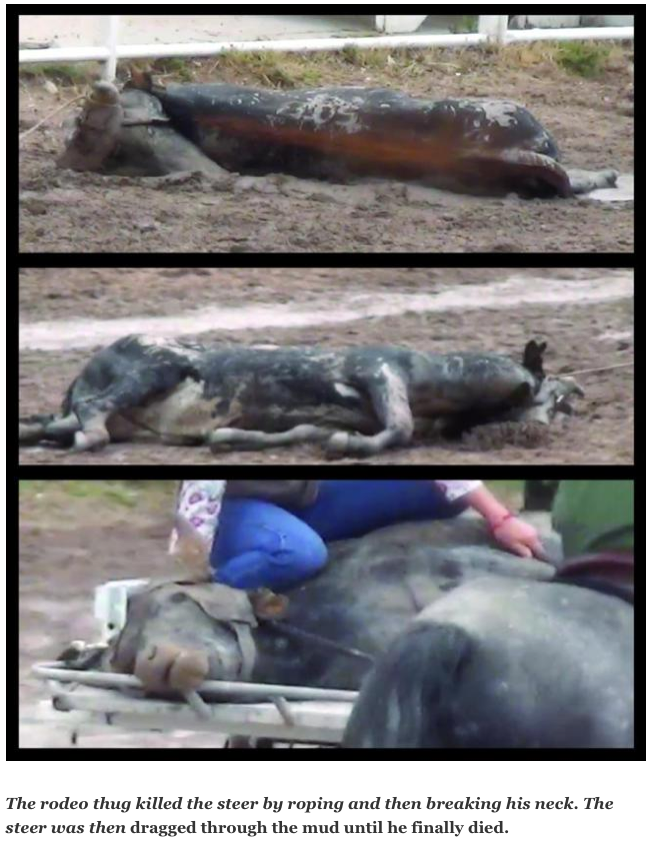 To understand the overall picture of rodeos, and not be swayed by any apparent excuses that these "accidents" are "one-off incidents" it is important I think to endure a litany of recent injuries and death. It is otherwise hard to comprehend just how much of a cowardly show most rodeos are. As the rodeo spin-doctors deny all, the reported animal deaths and injuries appear to be just the tip of a very large iceberg whose depths are as yet, officially unreported.

The June Reno Rodeo chose to instigate a ban on cameras this year, but that did not stop extremely abusive behavior being caught on a cell phone camera by local residents Ellie and Steven Lopez-Bowlan. The couple was on their way to their seats when they noticed rodeo personnel allegedly shocking and jabbing a horse with a wire prod in his anus! Trapped in a confined chute the horse was in distress and was also seemingly being electro-shocked, pinched and slapped with only one result in mind, to aggravate him into bucking for the audience.

Ellie Lopez-Bowlan was so shocked, and who could blame her, she called down from her vantage point for the men to stop but was immediately harassed by rodeo personnel to get back to her seat. Not so surprisingly, the Reno Rodeo official statement was of surprise and horror -- perhaps a little too surprised given its alleged history of turning a blind eye to the electro-shocking of horses. Even the rodeo veterinarian chimed in with a statement saying the couple was mistaken; he couldn't imagine ANYONE doing such a thing to a horse. The problem with that statement is that the camera doesn't lie, and the evidence was as plain as the nose on his face, so why wasn't he as horrified as any normal person would be and investigate?

Now I guess you could put this down to a one-off event if you weren't paying attention, but lo and behold the same stock contractors, the Flying U Rodeo, turn up at the Ute Stampede Rodeo in Nephi, Utah allegedly abusing another horse with a wire prod in his anus. I cannot fathom anyone having an excuse for the kind of despicable behavior caught on tape, rodeo personnel tying a horse's tail to a gate and repeatedly poking and kicking him on his behind.

According to the Wyoming Tribune Eagle "at least six animals died" during the Cheyenne Frontier Days Rodeo this year. Two steers had their legs broken, an injury which is extremely likely to end in death, another steer suffered a horrible and fatal neck injury when it was roped around the neck and dragged through the mud, its head flopping and lolling about in an utterly heartbreaking scenario. A calf was jerked off the ground in a roping event and landed badly. According to the rodeo, the calf suffered a neck and back "injury" and recovered; however witness Brandon Bohn said he heard an audible snap of the calf's neck and the animal appeared to no longer breathe. It sure doesn't look too good for the calf if you watch the video but hey, would love to hear from the stock contractor to whom the calf was apparently returned to and maybe even read the elusive veterinarian report. During the steer wrestling, a horse died of what the rodeo claims to be a pre-existing heart condition, but as it was being dragged up the trailer ramp, blood was clearly visible which is still unexplained. In the final days, another calf suffered a very severe back injury, which was potentially broken.

July's California Rodeo Salinas fared no better; the injured animal tally included a young steer that was trampled by a horse during a roping event which unfortunately proved fatal. Another calf appeared to have its leg broken and was left to hobble to the pen where it was left for a considerable amount of time with no veterinarian care. On the final day amidst the pomp and circumstance of that ol' Western tradition of glittering bulls, when bulls get sprayed in the face and eyes with an aerosol can and sprinkled with glitter, another calf was injured during the roping event, unable to stand he was hauled away on a tractor and hidden from view, fate again unknown.

At the Calgary Stampede Rodeo 2013 a steer was euthanized after suffering a broken neck. The rodeo veterinarian, Dr. Greg Evans stated that in addition to the severe neck injury the steer was paralyzed and had some systemic system failure. In other words, the contestant wrestled the animal so aggressively he broke the steer's neck and then again acted so surprised such a thing would happen! The rodeo was quick to point out that this kind of injury is rare, but when you put it together with all the other instances of broken necks during steer wrestling and roping events, not so rare.

Unlike the film industry, the rodeo circuit appears to have no accountability when it comes to injuring and killing animals. There was a huge public outcry over three horse deaths during the filming of the TV show Luck. The show was eventually cancelled, but the rodeo sanctioning body, the Professional Cowboys Rodeo Association ignores all complaints and instead just denies everything and closes ranks. As for all those "good" rodeo people who love their animals so much then isn't it time you self policed instead of being so outraged you are tarred with the same brush as those committing heinous animal abuse?