Since 2010, SHARK has been on the ground fighting pigeon shoots at the Wing Pointe canned hunt club, where we have video documented some of the worst animal cruelty we have ever witnessed. SHARK has been the only organization battling this private club of wealthy, depraved slob shooters. As the annual three-day August shoot at Wing Pointe approached, we decided to try to change that.

An innocent pigeon being destroyed at a Wing Pointe shoot. Untold thousands of birds suffered this fate and worse
SHARK sent a letter to the Federation of Humane Societies of Pennsylvania (FHSP) and challenged them to finally take action and join us at Wing Pointe.  To our pleasant surprise, some groups responded. The Humane Society of the United State (HSUS), The Berks County Humane Society and Anne Irwin of the Bucks County SPCA held a press conference in Reading, the seat of Berks County. The effort paid off, and with the help of SHARK's graphic video documentation, there was some good, and long overdue media coverage exposing pigeon shoots.  You can watch video of the TV news coverage HERE.

Though SHARK is not credited in the story, the press conference would have been a bust had they not used our footage of pigeon shoots. 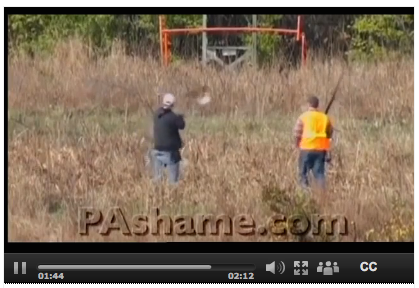 A screen shot of the online video of the news story

As you may recall, we have heavily criticized the FHSP and its associated organizations for not taking an active role to educate the public to help generate more support for banning pigeon shoots. SHARK has challenged the FHSP and its associated organizations to get out to the killings fields, and to involve the media. We congratulate the FHSP for finally getting into this battle! Now we are urging them to come out to Wing Pointe on August 30 and 31 for Wing Pointe’s annual two-day Labor Day weekend shoot, and to bring the media with them.

Now, however, we are not just calling on humane organizations - we are calling on anyone and everyone - and on you!

SHARK is putting the call out to everyone; we want this to be a massive effort of humane organizations and individuals who are disgusted with the thousands of innocent birds that will be slaughtered this Labor Day weekend.  We will be announcing more details of our plan next week.

There will be a very special protest at the Berks County Courthouse on Friday, August 29, prior to the shoot on the Labor Day Weekend. This protest is against longtime pigeon shooter and newly appointed Berks County Judge Adolph Antanavage. In the picture below, you can see Adolph shooting pigeons at Wing Pointe with a Confederate flag waiving near him. How can anyone who slaughters and wastes animals for enjoyment (and violates PA humane law) in front of a symbol of racism and hatred be put in a position to enforce the law and judge others? We are demanding the ouster of Judge Adolph Antanavage.

Adolph Antanavage shooting pigeons at Wing Pointe
Most people in Berks County don’t know about the pigeon killing judge who stands with the Confederate flag. WE NEED TO CHANGE THAT! We need to let everyone in Berks County, and throughout Pennsylvania know what is going on. This is your opportunity to make a difference for animals, and for the American justice system!
Watch our new video exposing Antanavage HERE.
In addition to pressing for the resignation of Adolph - the pigeon killing judge, we will soon be launching TV ads on local Pennsylvania cable networks that will push for legislation to ban pigeon shoots once and for all (more on that soon).

In order to pull this phase of our campaign off, we need your financial support. Please help us put pigeon shoots in front of the people of Pennsylvania, and bring the cruelty right into their homes. It is time for pigeon shoots to finally end, and we need the support of every single person who cares about animals.

Many years ago, hundreds of people traveled far to get to the Hegins' Labor Day shoot, and that shoot was half the size of what will happen at Wing Pointe this year. It’s time to once again show our strength and resolve.

This Labor Day we are kicking off a major new phase in our battle against pigeon shooting in Pennsylvania.