As we were putting together our annual year-end review of our work for the animals, we realized that, due to the extraordinary amount of campaigns and victories we've scored for animals in 2016, there was simply no way to put it all in one email. Therefore we will be sending you a series of emails detailing what we've accomplished.

From bowhunters shooting pregnant cownose rays in Maryland - a powerful United States Senator shooting hand-tossed pigeons in Oklahoma - challenging Ducks Unlimited in Minnesota - exposing cruel dairy farms in California and so much more, SHARK goes where no one else will, and saves lives that almost everyone else ignores.

With your help, SHARK has saved innumerable lives and forged great victories for animals in 2016, but it has come at a great cost; our resources are all but depleted.

We implore you to share this email with all your friends and all those who care about animals. Please let them know that the animals need a hard-working group like SHARK and that we need financial support to keep fighting for them.

Please click HERE to read the full mailer we've sent out, and HERE to watch our hard-hitting year-end video.

This past June, SHARK shut down a cruel Mexican-style rodeo that was scheduled to be at the Dream Park in Gloucester County, NJ!

Last year a SHARK investigator went undercover at a similar rodeo held at that venue. The video he took, which included bulls being mercilessly whipped and shocked with an electric prod, as well as rampant alcohol abuse, received major media coverage and the venue banned the rodeo. 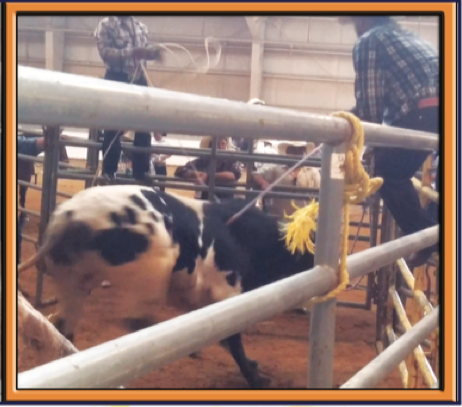 This poor animal was electro-shocked repeatedly. We filmed one rodeo worker holding a can of beer as he wielded the high-voltage device

This new rodeo lied to the owners, saying that it was only going to be a “dance.” We discovered the truth, moved quickly and forcefully and the event was immediately cancelled. The bad guys almost got their way, but SHARK's vigilance stopped them in their tracks!

Last year, Maryland-based Fish Feel alerted us to a horrendous cownose ray killing contest on the Patuxent River where pregnant rays were shot by bowhunters for fun and prize money. There were three contests held that year, two in Maryland and one in Virginia.

SHARK’s video of the slaughter was so dramatic that one of the contests lost its sponsors and it and the VA contest were cancelled! The third contest was put on by a group called American Bowhunters. We got the group kicked out of the first location they scheduled for the weigh-in station because they were not honest with the owner. We then got them kicked out of the second location because they misled that owner as well. They hid the third location hoping we would not find out where they would be, but we found it anyway. As the killers learned, we are relentless in our mission to fight animal cruelty! 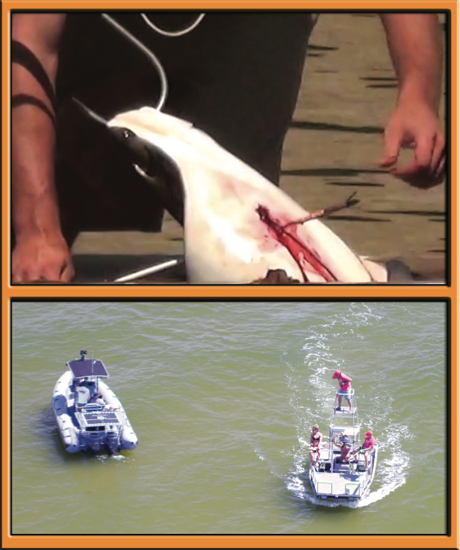 Above: This poor ray was still alive as they hooked her mouth and pulled the barbed arrow out of her body. Bottom: The Bob & Nancy squares off against the ray killers
International Condemnation
Thanks to a previous donation by animal protection heroes Bob Barker and Nancy Burnet, we had our boat, the Bob & Nancy, on the river that day. This enabled us to fly our remote-controlled drone over the bowhunters. The video we captured was horrifying; not only were rays tortured and left to die slow deaths in buckets filled with their own blood, but one loathsome bowhunter was filmed shooting a baby ray at point blank range with an arrow. This tiny animal (below) then struggled and suffered terribly as she bled out on the bowhunters boat. 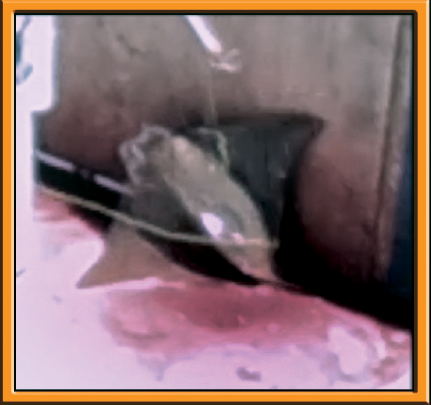 The video of this cruelty became international news with one British newspaper headline reading, “Sick killers shoot and torture mother and baby rays,” and another saying, “It's just an excuse for a blood fest.”
Legislation Introduced
Working with our partners at Fish Feel we took the video of the slaughter and held a press conference in Maryland. News coverage in the state was massive and has led to legislation being crafted to end these barbaric killing contests! 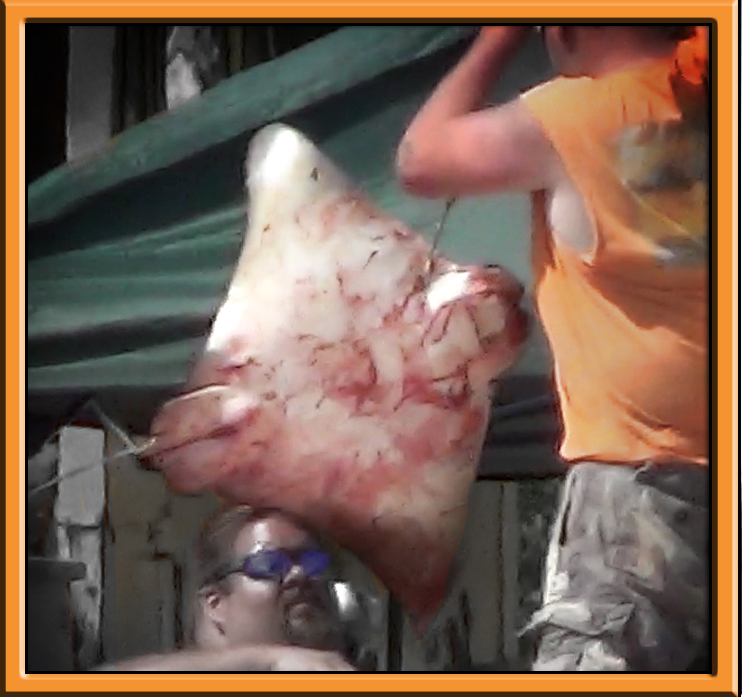 This picture of a battered and bloodied ray was taken at the bowhunters weigh-in station. One of the bowhunters was so angry that we got this close that they almost attacked our investigator. We put ourselves on the front-lines and in danger because the truth needs to get out there, and no one exposes the true horror of animal cruelty as SHARK does
Only SHARK thought to put a boat in the river and fly a drone to film the contest. Without that creative thinking and hard-fought activism, the bowhunters would have slaughtered to their hearts’ content without anyone knowing the horrors they were committing. This is another example of the technological advances SHARK uses for the protection of animals.

We want to thank our good friend Chris DeRose of Last Chance for Animals who joined us on our boat for the ray killing contest.

All the victories and ground-breaking campaigns we have shown you in this email, and that we will show you in forthcoming ones, would be impossible if not for your generous support. The truth is, we need that support right now. Our funds are almost gone. There is only enough money to pay for our investigators for a few months, then it’s over.

SHARK has only four full-time investigators who work day and night fighting for animals, and I mean that literally. You will find no more dedicated servants for the animals anywhere and the amount of work we do with so few people humbles me. I’m willing to bet that if you add all of their salaries (I am and have always been unpaid) it will come in under what one top executive of one of the big corporate animal groups rakes in every year. No where else will you find better value for your donation than with SHARK.

I believe in SHARK and our mission. That’s why I implore you to reach out to every one you know, show them what we do, and ask them to help us continue our vital work. I truly appreciate all that you have done for SHARK in the past, and I sincerely hope you will support us so that 2017 may bring even greater victories for the animals we all care about so much.

Steve Hindi
Founder and President
Please either mail a check to: SHARK at P.O. Box 28 Geneva, IL 60134 or click here to donate online 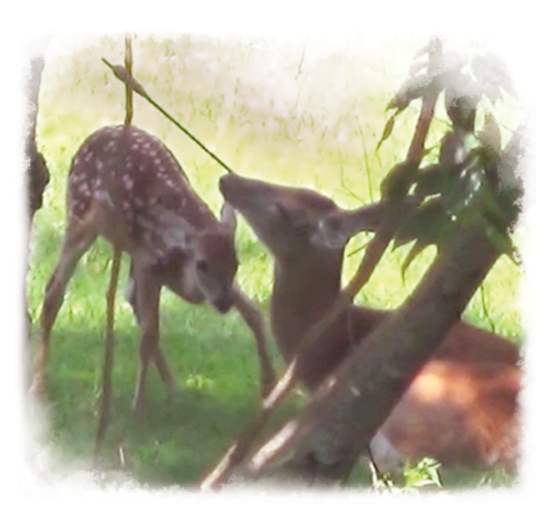 Some of our campaigns effects millions of animals. Sometimes, as in the case of Grace, a deer who was shot in the face with an arrow (and that we successfully fought to get her medial treatment and the arrow removed), we fight for one animal. Now we need your help so we can continue to fight and save lives, just as we did for Grace and her baby fawn