Last week we told you how we documented workers at a pigeon shoot in Tioga County who tore the heads off of dozens of living birds. We returned to PA last weekend and used our drones to document two days of slaughter at the Wing Pointe canned hunt club in Berks County. This time we not only filmed workers torturing birds - we also caught them burying the pigeons alive.
Watch the video HERE

Please contact PA Governor Tom Wolf and tell him these shoots much be stopped:
https://www.governor.pa.gov/contact/
717-787-2500 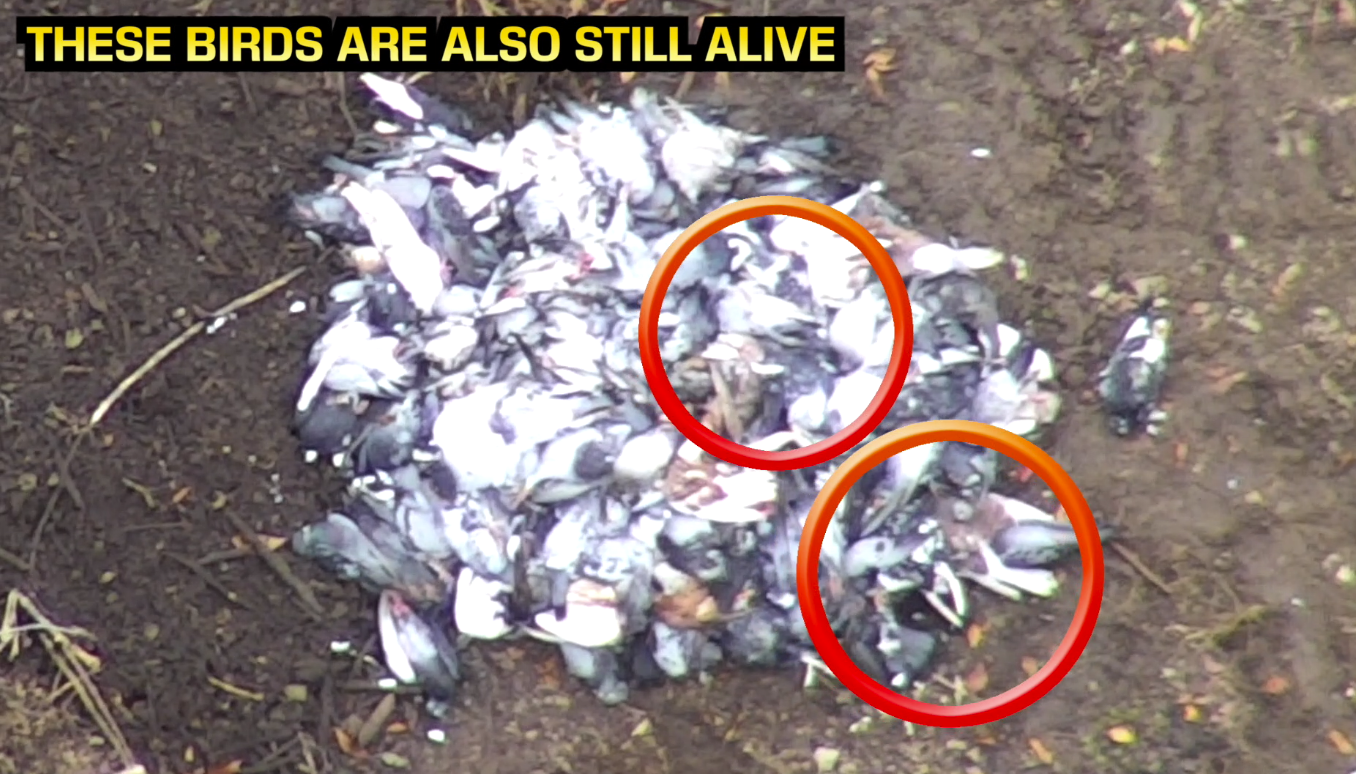 After the shoot these birds were among those buried alive
Our latest video is from the first day of the shoot. The second day’s footage will be released soon.

The good news is that this was a very small shoot, only about 8 shooters in total, and the shoots only lasted a handful of hours. Compare this to when we first found out about Wing Pointe seven years ago, when attendance would exceed 100 people and the shoots lasted from early morning to dusk. The reason for this massive reduction is because of SHARK's continued work exposing the Wing Pointe shoots. Our efforts have had a massive impact and saved thousands of lives over the years!

While there are many wealthy humane groups in PA, such as the Humane Society of Berks County and the Federated Humane Societies of PA, not one of them is doing anything about this horrendous cruelty. The fact is, SHARK is the ONLY organization on the ground in PA fighting for these birds, and we have to travel all the way from Illinois to do it.  If not for our hard work, no one would know that these disgusting acts are being committed.

This worker saw a living bird in the garbage barrel, picked her up, threw her back in and then put a lid on the barrel
We have sent our documentation to some Humane Society Police Officers, and we will let you know their response or, lack thereof, in the next few days.  Meanwhile, SHARK is expending substantial resources fighting for these helpless animals, so please make a generous donation today so we can continue to be there for these birds, who are suffering a cruel and hellish fate.

It is important to understand these horrific, bloody spectacles could have and obviously should have been eliminated decades ago. SHARK eliminated live pigeon shoots in our home state of Illinois. We have eliminated some pigeon shoot sites in PA. Most recently we eliminated the live pigeons shoots in Oklahoma of Jim Inhofe - an enormously powerful US Senator. Live pigeon shoots are compelling issues - the site of so much wasted life and so much gratuitous violence. Wasted life is repulsive to most people. You don’t have to be an activist to understand the cruel insanity. Nevertheless, these shoots continue because of the determined inaction of PA humane groups and the Humane Society of the United States. I challenge the leaders of everyone of those organizations including and most notably HSUS President Wayne Pacelle to either take appropriate action (as opposed to just giving lip service), or to resign and relinquish their fat paychecks and go out and obtain honest work.

The animals need and deserve so much better!

***SHARK is looking for a Psychologist/Psychiatrist who would be willing to provide a professional statement regarding children committing animal cruelty at these pigeon shoots, the effect it has on them and the danger they may pose to others.