It is easy to get disillusioned in the animal protection movement but today I am proud to say that SHARK investigations have prompted not one but THREE senate bills. VA SB1532, inspired by our camera drone being shot at over a live pigeon shoot, seeks to criminalize groups using camera drones to track animal abusing hunters.

But recent information coming to light suggests there is more to this bill then meets the eye.  The bill would also protect fox penning, where a wild fox or coyote is put in a pen and then attacked by a pack of hunting dogs for “entertainment.” Virginia Senator Frank M. Ruff who proposed this bill represents Mecklenburg County where five of these despicable clubs operate. 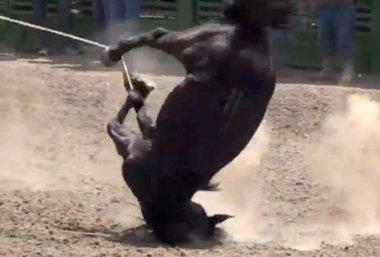 At last years Big Loop Rodeo, a SHARK video of the horse tripping event went viral and caused such public outrage that both Oregon (SB 790) and Nevada (SB 72) introduced senate bills to ban this horrific cruelty.

Previously in Nevada a horse-tripping ban was killed because rodeo organizers weighed in and opposed it. This year the Reno Rodeo, which doesn’t even allow horse tripping at it’s event, is coming out against the ban. As usual Reno Rodeo is citing all sorts of fear of where this might lead. I’m going to take a wild guess for their sake where it might lead, better protection for horses!!! It’s down right confounding how rodeo people always say how much they love their animals, exclaim in horror at any accusations of animal abuse and yet seem to stand in the way of progress towards better standards of animal welfare. Why would they hurt their animals they are too valuable right? Wrong…the good ol’ cowboy myth is just that, a myth. I never did see John Wayne tripping his horse or shooting it with 5,000 volts of electricity. It seems to me if John Wayne had seen this, the person responsible would have been “dealt with like the coward he is” and the audience would cheer.

If you are wondering where all those shocked, spent, drugged up and broken ex-rodeo horses are going - wonder no more. Oklahoma has the answer! To slaughter they will go! Lifting a 50-year ban on horse slaughter OK Governor, Mary Fallin legalized horse slaughter for food.  Yet another corrupt Governor unconcerned with anything but money and bending to the will of the special interest groups.

Currently in Pennsylvania, Senate Bill 510 was introduced which would effectively end live pigeon shoots. Much to the NRA’s chagrin they just can’t kill this bill permanently as they would like to. It is vitally important that PA state citizens take this seriously and contact their senators in support of this long, long overdue bill. It is criminal that the local law enforcement has deliberately stopped any attempts to bring animal cruelty charges to those involved. The evidence from the SHARK videos is clear and cannot be refuted on any grounds other than by the most corrupt. Click on the link to see our videos of the animal abuse at live pigeon shoots. (http://pashame.com/)