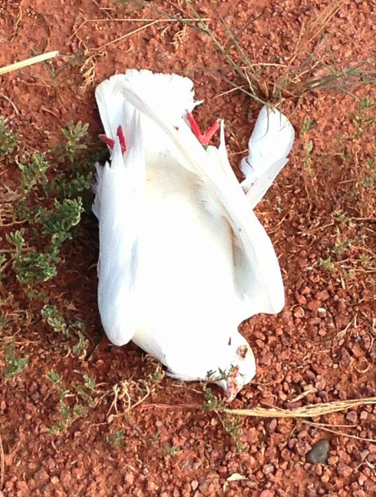 On August 7, 2014, SHowing Animals Respect and Kindness (SHARK) received an anonymous letter informing us that United States Senator Jim Inhofe, Republican of Oklahoma, was to have a live pigeon shoot as part of his fundraising event on September 5, 2014, at the Quartz Mountain Lodge in Lone Wolf, Oklahoma. The fundraiser was to support the "Friends of Jim Inhofe and the Fund For A Conservative Future."

The unknown writer said that they were a Republican and long time supporter of Senator Inhofe. They stated that: “The live pigeon shoot event is an embarrassment to hunters and to Republican (sic) supporters of Senator Inhofe. Someone, including Senator Inhofe, has apparently decided to push the limits beyond what is reasonable in most anyone’s mind, and I believe it has been done just to provide shock value and show the public that Senator Inhofe is such a hard-core conservative that he will go as far as killing animals for no other reason than shooting practice, which is simply animal cruelty.”

As SHARK is the nationwide leader in the animal protection movement fighting against live pigeons shoots, we decided to send in an undercover investigator to the event to both witness and film the pigeon shoot.

This is the resulting video:

During his political career, the National Rifle Association has paid Senator Inhofe over $51,000!