No More Rodeo for Poison's Rockett 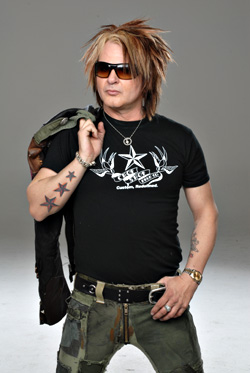 When SHARK became aware that the glam metal band Poison was scheduled to perform at the 2008 Greeley Stampede Rodeo, we immediately contacted drummer and co-founder Rikki Rockett.

Rockett is a dedicated animal advocate and he was shocked to learn that Poison had been booked to play for an event as abusive as a rodeo. After viewing recent rodeo abuse footage and carefully considering the information, Rockett declared that he would not play at any rodeo events in the future. Read Rikki Rockett's full statement below.

The resulting furor is being played out in Colorado and national media, and on the heels of Matchbox Twenty's cancellation at the Cheyenne Frontier Days Rodeo, is likely making other rodeo entertainers and sponsors think twice about associating with cruelty.

Thank Rikki for his Compassion!

Please take a moment to send your support Rikki's way. You can contact him on Twitter at @RikkiRockett

When Poison drummer Rikki Rockett signed to play a July 5 show in Greeley, Colorado, he wasn't told that the venue was part rock show and part rodeo. Rockett, a dedicated animal advocate for over sixteen years, was shocked to learn the truth.

"I had no idea that this gig included a rodeo. I have a huge problem with animal cruelty at rodeos. Greeley is a huge rodeo, which means an enormous amount of animal abuse! I am blown away that I missed the description of this show on our touring schedule printout."

Working with Los Angeles-based Last Chance for Animals (LCA), Rockett has worked with LCA founder Chris DeRose to expose the Animal "B" Dealer Rings and Puppy Mill atrocities. Rockett returns to his native state of Pennsylvania every September to help rally support to stop the puppy mills around Lancaster, PA.

"You don't have to be an animal rights activist to see how these rodeos hurt the animals. It isn't a matter of perspective or opinion--animal suffering, injuries and death are all part of rodeos." Rockett specifically decries the use of electric shock, buck straps, and spurs regularly used in rodeos, known as "Tools of Torment" to animal advocates. As the rodeo industry has attempted to expand, the need to put on a more exciting show has resulted in more abuse, especially since some events are partly scored on how wild an animal acts.

When asked if he will perform with Poison that night, Rockett stated, "I represent one quarter of Poison, not Poison as a band. My band mates do understand my feelings about this. I don't own the band, but Poison isn't Poison without me. I have decided to keep my commitment to the fans and educate them about rodeo cruelty at the same time. However, this is the last gig like this, and the rest of the band agrees with that."

"Rodeos are often advertised as an American tradition," Rockett concludes, "so I am asking the promoter of this "American tradition" to also honor another American tradition, Freedom of Speech. I want people who oppose rodeos on the basis of cruelty to be able to distribute information at the show. It's only fair and hopefully it will help better the treatment of the animals."

Rockett heard about the Greeley Rodeo from Steve Hindi. Hindi is the president of SHARK (SHowing Animals Respect and Kindness), an animal protection organization with fifteen years of experience investigating rodeos nationwide. In just the last year, SHARK has exposed animal abuse at over a dozen rodeos, including such major events as the Cheyenne Frontier Days, the Denver Stock Show and Rodeo, the National Finals Rodeo in Las Vegas, and the Tucson Rodeo. The Tucson Rodeo was produced by Bennie and Rhett Beutler, the same stock contractors who are producing the Greeley Stampede Rodeo.