Of course the law didn't pass. The FAA controls the airspace over the United States and individual states cannot grant permission for people to shoot down aircraft they don't like. But that didn't stop Senator Shortey from being stupid introducing the law again in 2017. You can read this version HERE. SHARK was still filming Senator Inhofe's pigeon slaughter so they still needed protection to stop citizens from documenting that cruelty. Senator Shortey’s legislation is not designed for the public interest. He doesn't want to right a wrong, he wants to perpetuate it. Misusing state law to help a Senator raise federal campaign cash is a disgraceful violation of the public trust.

It is at this point that the story takes an even darker turn. On March 9, 2017, around midnight, just off the interstate at a Moore, OK Super 8, Senator Shortey was reportedly found in a hotel room with a 17 year-old male prostitute. You can read a news report here.

In the subsequent days, Shortey was stripped of his capitol office, his parking space and state-owned laptop, and they scrubbed his name off any legislation he authored or co-authored — as well as his office door. So unless Inhofe can find another lackey to carry his water and put their name on the idiotic drone bill, hopefully that is at least dead for this year.

On March 16, 2017, the Cleveland County District Attorney's office charged Shortey with engaging in child prostitution, engaging in prostitution within 1,000 feet of a church, and transporting a minor for prostitution/lewdness.

Police reported a "strong odor of raw marijuana" emanating from the room. According to an affidavit, the duo told police they had brought marijuana with them, which Shortey said they were smoking when police arrived. Police said that they had discovering sexually explicit text messages between the duo in which Shortey called the teen "baby boy" and offered him cash in exchange for sexual acts. Shortey turned himself in the same day and was released on a $100,000 bond. The FBI and U.S. Secret Service in Oklahoma City both confirmed that they had joined the investigation into Shortey, and the FBI conducted a search of his home. 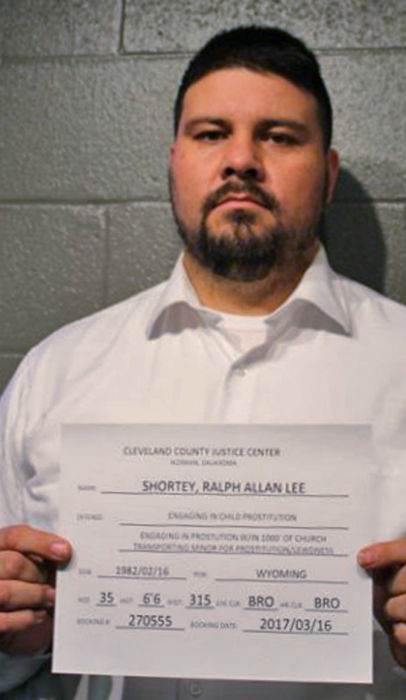 On March 22, 2017 Shortey officially resigned from the Oklahoma Senate:

And that's where the story stands on March 22, 2017. Given that Shortey was part of President Donald J. Trump's leadership in Oklahoma the media has shown great interest in this case. We will update as news breaks.