After reviewing videos of the 2007 Cheyenne Frontier Days Rodeo from SHowing Animals Respect and Kindness (SHARK), Grammy-winning Rob Thomas and Grammy and American Music Award nominated Matchbox Twenty have decided to withdraw from the entertainment line-up. 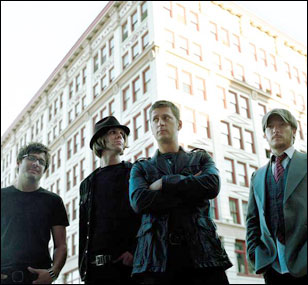 Matchbox Twenty will not be able to perform at Cheyenne Frontier Days on July 18th. After careful consideration it was decided that the participating in this event would directly contradict the mission statement of SIDEWALK ANGELS FOUNDATION, our non profit organization. The other members of Matchbox Twenty support this decision and while we understand that a great deal of effort went into the planning of this show, and apologize to any and all fans who purchased tickets to see us, we ask that they please understand that it would be impossible for us to put ourselves in the position of making money from what we believe to be the mistreatment of animals.

Rob and Marisol Thomas and The Sidewalk Angels Foundation

According to SHARK president Steve Hindi, "So long as CFD is going to include egregious animal abuse, it will have to find entertainers who simply don't give a damn about compassion."

When SHARK found out that Matchbox Twenty was scheduled to perform at the CFD, kicking off their concert entertainment line-up, we immediately sent them a package of information and documentation including CFD rodeo footage and newspaper articles exposing the abuse.

Similar packages had been sent to Carrie Underwood in 2006 and Def Leppard and Bon Jovi in 2007. Carrie Underwood canceled her appearance at CFD in 2006, and coffee giant Starbucks withdrew its rodeo sponsorship, but neither Def Leppard nor Bon Jovi responded to our appeals. Fortunately, Matchbox Twenty was willing to walk its talk.

Lead Singer Rob Thomas and his wife Marisol established the Sidewalk Angels Foundation to help homeless people and animals. SHARK was sure that once they knew about the cruelty and deaths at rodeos and especially at Cheyenne, that they would not want to be a part of it. Sure enough, after reviewing the information sent to them, Matchbox Twenty thanked SHARK for "making them aware of the situation" and canceled their upcoming performance at Cheyenne Frontier Days Rodeo.

SHARK is sincerely appreciative of Rob and Marisol's ethical and humane decision to disassociate from this cruel and deadly industry. Their fortitude and integrity to live and stand by their principles is truly inspirational. The world needs a lot more phenomenal, compassionate angels like them.

You can also go to the following link and add your supportive comments to the band.Please let the band know that we know they are heros. They have stood up for rodeo's victims when so many others have not.

Click here to urge the sponsors of the CFD Rodeo to stand against abuse with Rob Thomas and Carrie Underwood, instead of putting their money and reputation alongside the animal abusers.

People within the rodeo industry are falling all over themselves trying to come up with insults to hurl at the very same band that they had been praising and touting up until the day that Matchbox Twenty pulled their support to CFD. So far, they seem to like using the word "hypocritical" when it comes to the fact that Matchbox Twenty is giving a performance at the North Dakota State Fair, which does include a day's rodeo event.

The difference is that the Cheyenne Frontier Days Rodeo is one of the most brutal and deadly in the world. It includes steer busting, the single most fatal event in rodeo, as well as the very brutal wild horse race. CFD allows calf jerkdowns and has a history of shocking animals repeatedly, even after being exposed and fined.

CFD is primarily a rodeo with some fluff around the edges. The North Dakota State Fair, like most state fairs, is mainly a fair with some rodeo around the edges. Since rodeo supporters have made a big deal out of it, perhaps Matchbox Twenty will choose not to play at a fair including rodeos, but Cheyenne's 10-day rodeo and the North Dakota State Fair is an apples to oranges comparison, and rodeo supporters know it.

Rodeo supporters are simply showing their considerable hateful side in attempting to castigate a group of people who, unlike rodeo supporters, have a set of morals and live by them. MB20 released a very diplomatic and nonaggressive statement regarding their cancellation of their CFD performance.

Predictably, this was not good enough for rodeo supporters. Nothing ever is. It is amazing how a people who are so brutally cruel to animals are such whiners when things don't go completely their way. Rodeo supporters should not look upon Matchbox Twenty as enemies, but rather, as examples of people with integrity.