What does a Former Bronc Rider and Rodeo Veterinarian Have To Say?

Click Here to find out why an expert panel of German veterinarians recommends banning flank straps, spurs, bullriding, and the "wild" horse race from rodeo. 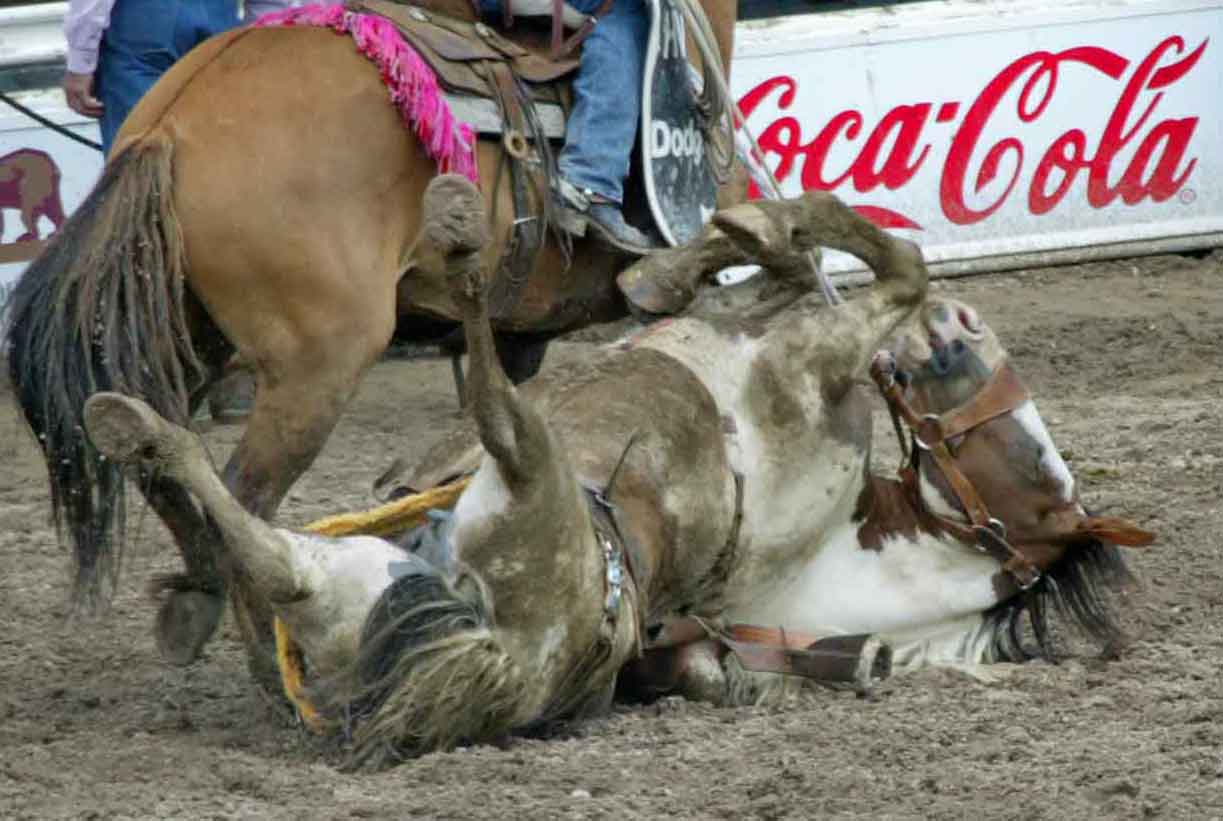 Dr. Peggy Larson has a more varied background in the veterinary profession than most can claim. She is the founder of the National Spay and Neuter Coalition and operates a low- cost spay and neuter clinic with her husband, who is also a veterinarian.

As a former veterinary medical officer with the United States Department of Agriculture, she participated in animal welfare inspections. She has also worked as a Vermont State Veterinarian and Chief of Livestock and Meat Inspection, has sat on an Institutional Animal Care and Use Committee, is a pathology and computer specialist, and has practiced institutional and large animal medicine.

Subsequently, she is now working to ban calf roping and steer “busting” and is also an international media consultant on rodeo issues.

Dr. Larson was interviewed by the Association of Veterinarians for Animal Rights (AVAR)

AVAR: What made you decide to challenge rodeo practices?

I grew up on a ranch in the West, and rodeo was our sport.However, after completing veterinary college and a Master's degree in animal pathology, the acquired knowledge about injuries and pain made me take a second look at rodeo events, especially calf roping and steer “busting.

”I started looking at the animal used in the rodeo event instead of the competitor. When my focus shifted to the animal, I saw a whole different side of rodeo. I saw terrified little calves being prodded and their tails twisted to make them burst out of the chute only to be stopped cold with a strangling rope around their necks. I saw cattle prods used on bulls to enhance performance. I saw a lot of disregard for the animals by the competitors, as manifested by kicking anoxic calves to make them stand, poking animals with sticks and prods to make them agitated, and jerking and hitting roping horses that did not perform well. It made me angry and disgusted.

I did not start working against rodeo until about 10 years ago. Prior to that time, I was too busy earning a living and maintaining our home. But the anger and disgust stayed with me and when I retired (well, sort of) I had time to work on the rodeo issue. Also, the animal rights and welfare organizations had begun to recognize the cruelty in rodeo and were starting to protest them. While their hearts were in the right place, they lacked knowledge about rodeo and often made embarrassing mistakes. I started consulting with them to help make them more effective and just kept on going.

Currently, I am internationally recognized by the media as someone knowledgeable about rodeo and have consulted with ABC, BBC and ARTE (French equivalent of public television) when they documented rodeo animal abuse. Many of the issues I have consulted on have won Genesis Awards. ABC and ARTE have won Genesis Awards for exposing rodeo animal abuse.

AVAR: What kinds of animal injuries have you witnessed at rodeo events?

Larson: I stopped going to rodeos after graduating from veterinary college. However, I saw a calf break its leg. On many occasions, I saw calves choked into anoxia from the rope around their necks.

I treated saddle horses with wounds to their mouths from abusive use of the bit. One horse had half his tongue severed. I saw lots of so-called “minor” injuries, like cuts and abrasions, lameness, and eye injuries.

I believe the callous attitude toward the calves added to their injuries; there was no concern for their welfare at all. With the advent of the video recorder, I have perused many feet of film documenting rodeo animal abuse. I’ve seen injuries that ended in death, some resulting in death from euthanasia or a trip to the slaughter plant, broken bones, lameness, and minor scrapes and cuts.

AVAR: Last year, you approached the American Veterinary Medical Association's Animal Welfare Committee (AVMA-AWC) to adopt a position statement on rodeo but were unsuccessful. Do you see the AVMA ever taking a stand against using animals in such a brutal and degrading way or even opposing the most abusive of rodeo practices?

Larson: I was part of an international group that met with Mitt Romney, President of the Salt Lake Organizing Committee, to explain to him inherent animal abuse in rodeo, particularly the roping events. My role was to provide him with veterinary medical documentation of injuries sustained by cattle in rodeos.

During the meeting, Mr. Romney said he would seriously consider banning calf roping. We believe he was merely placating us because the rodeo is being held unchanged. He had the power to stop calf roping but did not.

After the meeting, our group held a press conference. Surprisingly, the media supported our view after it watched the animal abuse on videos. We did get some very good press following the meeting. Polls indicated that the public also did not want the rodeo. In some areas, 80 percent of the public wanted the rodeo dropped. We did accomplish one important thing: The rodeo winners will not receive gold, silver, or bronze medals.

AVAR: Many localities now ban rodeo or have restrictions on it. Do you think this is a sign of a positive shift in public attitude away from violent entertainment?

Larson: Much has been publicized about violence on TV and its effects on children. Unfortunately, the majority of the public, especially in the western part of this country, does not consider rodeo violent entertainment. In fact, rodeo coverage on TV is increasing. The public is being duped into thinking that rodeo is benign entertainment.

For instance, the PRCA controls the camera shots that ESPN can use while filming rodeo. In calf roping, ESPN is not allowed by the PRCA to show the calf actually being dropped. The audience will never see the rope strangling the calf; they will never see the calf jerked off its feet, dragged, and choked. As soon as the loop settles over the calf's head, the camera moves away from the calf and moves back only after the calf is tied.

I expect that changes in public opinion will occur slowly. Most people focus on the competitor in the event instead of the animal. The focus needs to shift to the animal. We have huge populations who never attend rodeos or even think about rodeos but, when asked, they think rodeo is harmless entertainment. Once they are educated about the abuses in rodeo, they become anti-rodeo. We need to reach that population.

AVAR: What can veterinarians do to help animals when rodeo events are scheduled in their area?

Larson: If veterinarians really want to help animals used in rodeo, they should start by writing to the AVMA- AWC asking for a change in the policy on animals in entertainment.

On the local level, veterinarians should educate themselves about rodeo so that they are accurate in their complaint. They can lend support at meetings set up by local animal rights or welfare groups to discuss the issue. A press conference will help disseminate the information gathered at the meeting. Veterinarians can write letters to the editor condemning rodeo. Veterinarians can also talk with the sponsors of the rodeo asking them to stop. Veterinarians can also initiate legislation to stop rodeo or stop certain rodeo events or make rodeo equipment like spurs or prods or bucking straps illegal. Legislation will stop rodeo more effectively than any other method. For example, when Pasadena, California, enacted their anti-rodeo law, rodeo ceased to exist there.

Ask that the AVMA amend their position statement on the Welfare of Animals in Spectator Events to, at the very least, oppose calf roping and steer busting events. Also, please ask that they withdraw their endorsement of the Professional Rodeo Cowboy’s Association animal welfare guidelines.

Reprinted with Permission from AVAR Directions: Winter 2002, the newsletter of the Association of Veterinarians for Animal Rights. AVAR is “committed to balancing the needs of nonhuman animals with those of human animals."