On May 24th, the organization, Animal Protection PAC, held a press conference to expose members of the United Bowhunters of New Jersey and urge a criminal investigation. According to the bowhunting group's own website, pheasants were bought, "put to sleep", and taken to private land, whereupon the birds then had to be kicked and prodded into flight, only to be shot down at close range. The UBNJ video and comments have since been removed from their site and the bowhunters have threatened to sue the animal protectors. 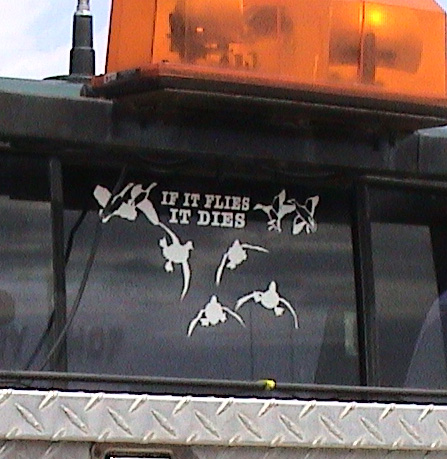 A proud and callous hunter's truck displays the slogan "If it flies, it dies."
Apparently, for New Jersey bowhunters, kicking a disoriented bird into
half-flight is enough of a reason to kill.

SHARK's anti-hunting web site is named HuntersRapeNature.com. This has drawn heavy criticism from hunting apologists. Hunters insist that they are conservationists and sportsmen, and that they respect those they wantonly slaughter.

Their own video footage refutes their argument. Not only are these people obviously slob thrill killers of cage-raised birds, but there has been a profound silence from the rest of the hunting community about this matter that speaks volumes about the entire world of hunting.

They Call That Sport?

It's hard to decide what was more disturbing about the video shown by animal rights activists this week in which bowhunters kicked and prodded pheasants to make them take flight before firing their arrows at nearly point-blank range: The video itself, in which hunters exchanged high-fives after watching the limp birds fall to earth, or the response to the video from Larry Herrighty, chief of the Bureau of Wildlife Management in the state Department of Environmental Protection.

"I don't see anything illegal in the video that I saw," Herrighty said. If it wasn't illegal, it should be. It was barbaric.

The hunters apparently transported the pheasants to a site in Sussex County, releasing them one at a time. As the hunters stood in a row, bows at the ready, one of them would either poke or kick the pheasant to get it off the ground.

Before the birds were even 10 feet in the air, the hunters would unleash a fusillade of arrows. There's more sport involved in picking off plastic ducks at an amusement park.

The vice president of the United Bowhunters of New Jersey, which apparently sponsored the event, defended the hunters' actions. "Whether they flushed those birds by shaking or kicking at a bush, or used a dog, they are both accepted methods," said Matt Trembow.

They may be acceptable to bowhunters. But they violate any civilized standard of behavior.

The state Society for the Prevention of Cruelty to Animals says it will investigate the incident. Stuart Chaifetz, director of the Animal Protection PAC, hopes the state will prosecute the case. If officials find there are no grounds for doing so, lawmakers must draft legislation that will provide an appropriate punishment for yahoos who engage in such cowardly, inhumane conduct.

TRENTON -- An animal-rights activist today played videos of laughing, high-fiving men kicking and poking allegedly drugged Ringneck pheasants so they would take flight to be targeted by fusillades of arrows and killed.

"We are hoping the state will prosecute," said Stuart Chaifetz of Cherry Hill, director of what he says is a 3,000-member Animal Protection PAC, short for political action committee.

Chaifetz, a longtime opponent of hunting, said he was turning the video over to the New Jersey Society for the Protection of Cruelty to Animals, or SPCA.

"There was no chase. They basically just sat there until they were forced to move," said Chaifetz, who added that "the cruelty is in the kicking."

He said state law is not precise but generally holds it to be illegal to conduct target practice on live animals.

The videos, which Chaifetz said he copied from Internet sites focused on outdoors activities, showed men in wintry hunting clothes kicking and poking the reluctant birds, hiding as they were on a grassy field.

The pheasants then took to the air, whereupon the men loosed arrows at the fugitives, killing each, except for one that got away.

The men cheered one another and slapped palms as a bird dog pounded on the fallen fowl.

Chaifetz said the shooting took place Feb. 18 of this year on private land in Sussex County, under auspices of a group called United Bowhunters of New Jersey.

Chaifetz said the group told on its Web site how the shooters had drugged the birds so they would not flush until the hunters were right upon them.

The SPCA, the state and hunting groups did not immediately comment.