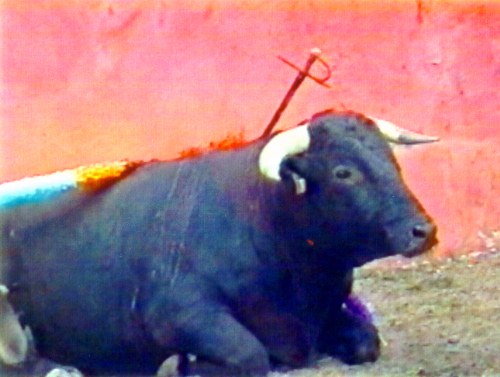 Mobbed by a gang of cowards, confused and terrified beyond words, repeatedly
stabbed with spears, harpoons and a sword, exhausted and dying from his wounds
and blood loss and unable to continue any further, Bright Eyes lowers in an act of
complete submission.

Chapter three reveals the little-known counter-tradition of conscientious Spaniards seeking for centuries to abolish killing of bulls for sport--a movement which has recently gained force,  bringing the passage of anti-bullfighting legislation in Catalan state and more than 20 individual cities.  Polls have for more than 20 years shown that the majority of Spaniards favor banning bullfighting.

Chapter four describes how bullfights remain popular in Colombia, Venezuela and Ecuador,  but are in decline in Peru.  Portuguese bullfights,  often mis-described as "bloodless,"  are particularly brutal because while the bull is not killed in the ring,  he does have banderillas (banner-festooned daggers) stuck in him,  and the injured bull, destined for the slaughterhouse,  sometimes suffers for days before being put to death.   This makes a mockery of the 1928 law that forbade killing bulls in the ring to try to reduce the animals' suffering.

In later chapters, Ogorzaly relates how artists,  authors and the cinema have sanitized bullfighting and romanticized the matador.  Ogorzaly is especially scornful of Ernest Hemingway,  whose 1932 volume Death in the Afternoon is still widely believed to be the most authoritative book on Spanish bullfighting written in the English language.

"Hemingway found the sight of a horse tripping over its own entrails 'comic,'"  Ogorzaly writes.   "It is too bad that the old reprobate could not have had an out-of-the-body experience and seen himself on that fateful day in 1961 after he had put a shotgun to his face and pulled the trigger.  He might have laughed his head off,  or at least what he had left of it."  But the evil that men do lives on.  Running with the bulls en route to the ring in Pamplona,  a little-known local tradition when Hemingway wrote about it in The Sun Also Rises (1926),  now attracts thousands of participants from around the world,  and similar events are now held in many other nations.

The prevalence of bullfighting in the Spanish-speaking world,  where most people are devout Catholics,  is also an indictment of the failure of the Roman Catholic Church to enforce anti-bullfighting statements and edicts issued from the Vatican many times since 1567,  when Pope Pious V in the bull De salute gregis dominici forbade bullfighting as an entertainment more proper of demons than humans.  Pious V excommunicated emperors,  kings and cardinals who would not ban bullfights,  and clerics who attended bullfights,  and excluded bullfighters from Christian burial.  Vatican secretary of state Cardinal Gasparri in 1920 wrote that,  "The Church maintains His Holiness Pious V's condemnation of such bloody,  shameful shows,"  Monsignor Mario Canciani reiterated the Vatican position in 1989, and Vatican theologian Marie Hendrickx reiterated it yet again in 2000 in the semi-official Vatican newspaper L'Osservatore Romano.

Ogorzaly describes how churches,  convents and other Catholic institutions continue to defy the Vatican by actually sponsoring bullfights as fundraising events.
Actively trying to stop bullfighting has been left to dedicated activists.

Ogorzaly devotes an entire chapter to the work done by fellow Chicagoan Steve Hindi of SHARK,  whose videography is the best documentation yet of the cruelty involved in both bullfighting and its close U.S. cousin,  rodeo.

Ogorzaly describes how bullfighting is lucrative enough to buy survival in France,  where over 80% of the population oppose bullfighting,  and in Mexico,  where a 1998 poll showed that 87% of Mexicans are opposed to bullfighting.   France,  Mexico,  Portugal,  and Colombia all have organizations working to stop bullfighting,  but even with majority support,  they still lack the clout to close the corridas.

Bullfighting is not uniquely a disease of the Spanish culture.  Similar ritualistic bull-killing is practiced in parts of Asia and Africa,  including at the Zulu "First Fruits" festival’  where at the end of each year a bull is hideously tortured to death by young Zulu males.

Just as defenders of Spanish bullfighting dismiss criticism of the corrida as unpatriotic and an attack on Spanish culture’  so any criticism of the Zulu ritual is denounced as racist and an attack on Zulu culture.  Just as the Vatican fails to follow up the 1567 prohibition of bullfighting with actual excommunications,  so the National Council of the SPCA  in South Africa fails to press cruelty charges against the Zulus.

Rejecting cultural pretexts for such sadistic exercises,  Ogorzaly condemns those who argue that bullfighting can be considered an art form.  All the glittering sequined costumes and colourful pageantry cannot disguise the sleazy reality:  if this is an art form,  it can only be pornography.