SHARK has caught the Rodeo Mafia red-handed violating their promise of veterinary care for their animal victims, and then lying about it to the media. The victims are the steers of steer busting, the most abused victims in the rodeo industry. And it wasn't just any rodeo, but the Professional Rodeo Cowboys Association's National Finals Steer Roping in Hobbs, New Mexico.

On November 2 & 3, 2007, SHARK investigators conducted an undercover investigation into the National Finals Steer Roping (NFSR). After SHARK's repeated exposures of rodeo's secrets, the rodeo industry's videocamera ban at the NFSR came as little surprise. The rodeo thugs never had a clue as SHARK used undercover equipment to document the brutal abuse.

The very fact that the steer busting finals were held in a remote location like Hobbs, New Mexico, when all the other National Finals events are held in Las Vegas, is an acknowledgement by rodeo folks that steer busting is indefensible.

Oh, rodeo thugs like to claim that the arena in Las Vegas isn't the correct size for this cruel event, but the fact is that the Nevada State veterinarian will not allow steer busting. In an April 2005 edition of the Colorado Springs Independent, David Thain, Nevada's state veterinarian, said the event is considered too harmful.

"I think you see too many accidents with it -- animals getting hurt too often." Another rodeo lie exposed.

So, the PRCA attempted to hide steer busting as if it were a dogfight, but then, when it comes to the animal cruelty, violence and suffering, steer busting is no better than a dogfight. This was the third time SHARK investigators attended the NFSR, but we are still amazed at the level of violence that the steers endure. Given the brutality in steer busting, it's almost miraculous that any of the victims walk away.

A horse was also injured when his leg became entangled during the roping.

When the first steer was injured on Friday night the rodeo announcer falsely claimed:

"We work in complete harmony with the American Humane Society of the U S of A."

There is no truth whatsoever to that statement. It is an absolute lie. But then, rodeo announcers lie all the time about the number and severity of rodeo animal injuries, even to the point of claiming that animals killed are still alive. The announcer said he would inform the crowd about the condition of the injured steer. No such announcement was ever made. Not about that steer, not about any of the victims. 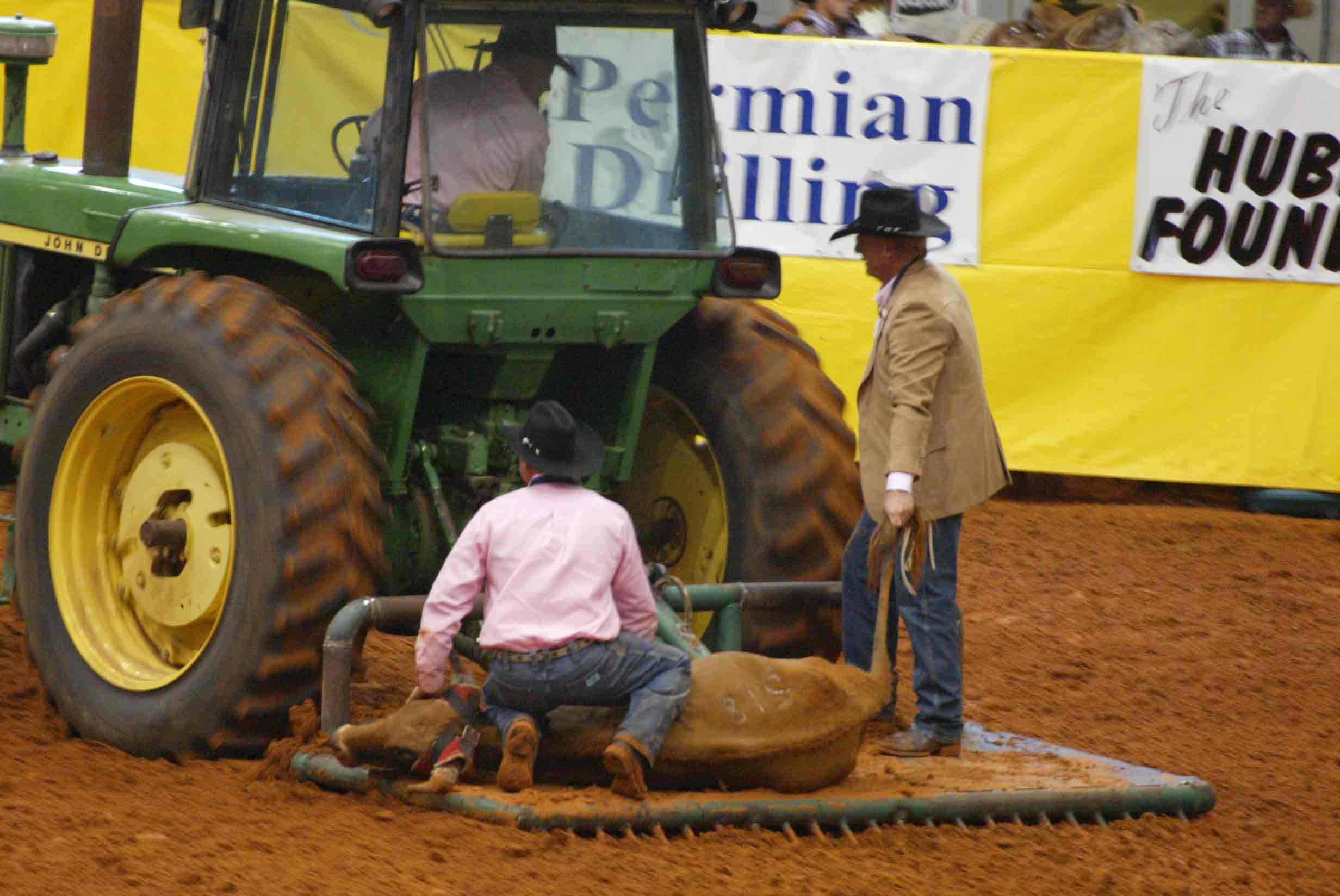 In the October 24, 2007 edition of the PRCA publication, ProRodeo Sport News, a caption under a picture of the Lea County Event Center states the following:

"The top fifteen ropers from 2007 will battle for a record $195,000 purse in front of sold-out crowds for two nights." Sold out crowds? Take a look at these pictures of the stands taken during the 2007 finals. This is the PRCA's version of "sold out crowds"? If there was any humor to be found at this bludgeon-fest, it was this statement, given the fact of the huge number of empty seats.

Then there was presidential candidate NM Governor Bill Richardson. One thing you probably won't hear during his campaign is that he has committed tens of millions of tax dollars to promote and enrich the cruel rodeo industry in New Mexico. Bill Richardson is just another unethical politician, caught supporting cruelty and abuse for the sake of publicity in this ad from the NFSR program and signage that looked over injured animals.

This is in spite of SHARK's personal meeting with the governor, at which time we gave him overwhelming video and still images, and other information regarding rodeo animal abuse. Governor Richardson's generosity to the rodeo industry is especially appalling given that New Mexico is one of the most impoverished states in the nation.

So what was the care given to steers injured at the Steer Busting Finals?

The first injury on the second night occurred at about 8:15 p.m. Within two minutes the victim was dragged out of the arena and locked in the back of a livestock trailer as an investigator documented from being hidden outside. The steer was not checked out by a veterinarian, in spite of the rodeo announcer's promise that injured animals would receive, "the very, very best care." Another rodeo lie exposed. second injured steer was sledded out about an hour later. Like the first victim, he was dragged into the trailer, which was then locked up. There was no veterinary care provided.

Injured steers were discarded like garbage, and locked up in this trailer. SHARK investigators stayed around the area for the duration of the performance, filming from time to time from across the road. During that time, no one went into the trailer. There was no care given to the injured victims, as promised and dictated by the PRCA's rules.

The rodeo performance ended at approximately 10:30 pm. At 10:43 pm SHARK attempted to talk to the stock contractor in charge of caring for the steers, Rocky Garnett, to inquire about the condition of the steers. Even though we saw Rocky Garnett in the shadows, the rodeo folks denied he was there.

Deputies from the Lea County Sheriff's appeared and we again requested to speak with Rocky Garnett regarding the condition of the steers. An officer reappeared a few minutes later stating that Rocky was too busy to talk with us.

Then Ralph Knoll, Director of Activities for the Lea County Event Center appeared stating that we were in violation of PRCA copyright rules (which we weren't), issued a criminal trespass warning and ordered us off the property. We received permission from the Deputies to continue to videotape from across the street - off of the Event Center property. A truck and tractor were brought in and bright lights were displayed in an attempt to block our view of the trailer with the injured steers.

After SHARK notified the media following the NFSR, the November 10, 2007 edition of theAlbuquerque Journalincluded an article about the injured steers at the steer busting finals. Read the AJ article here.

Cindy Schonholtz, who holds the duplicitous title of PRCA Animal Welfare Coordinator, but was not at the NFSR, claimed that none of the steers sustained serious injuries, and further claimed that the steers were sledded out "as a precaution." Most appallingly, Ms. Schonholtz claimed that by the end of the event, the cattle were released from the trailer to feed in pens. That is another rodeo lie. The police report from that evening states:

"They (the steers) were removed from the event center in the same trailer."

SHARK filmed the windowless trailer throughout the evening, and no steer ever left it. Click here to read the police report completely corroborating SHARK's account and calling into question the integrity of comments from the PRCA.

SHARK placed numerous calls to Cindy Schonholtz after the NFSR to communicate SHARK's findings about the finals, and to get the supposed onsite veterinarian's injury reports. Ms. Schonholtz did not return any of our calls.

We were very pleased by the professional conduct of deputies of the Lea County Sheriff's Department. The deputies were among the most professional we have ever encountered.

UPDATE Nov. 30, 2007:
SHARK is seeing very positive movement within the Boys and Girls Clubs of America since we brought this issue to public light. Although things got off to a somewhat rocky start with BGCA, it looks as if our video proof of what happened to the animal victims at the steer busting finals may be sufficient to persuade the BGCA to move in a direction of protecting children from being involved in this kind of abuse in the future.

SHARK feels very optimistic that as the BGCA conducts genuine research on this issue they will be in agreement with us with regard to the inappropriateness of taking young, impressionable children, and especially at-risk children, to violent events wherein animals may be harmed.

BGCA have requested that SHARK supporters not contact them while they are focusing on working toward a resolution, and we are satisfied that their assurances are genuine. Toward that end, SHARK has removed the BGCA campaign video on YouTube.com and on this site.

Your phone calls and e-mails have been noticed and have made a difference in how quickly this campaign has progressed. Thank You! Read some of the letters written to the B&GC.

SHARK was horrified to see that the Boys and Girls Club of Hobbs brought approximately one hundred children to the steer busting finals. Why would an organization dedicated to nuturing and teaching America's children send the message that it's okay to brutalize and injure animals for entertainment and profit?

It's bad enough that the PRCA would stoop so low as to use children to try to fill its largely empty stands, but what of the reaction from the Boys and Girls Club?

After further discussion with another, more cordial, Boys and Girls Club representative, SHARK received a written statement from the organization describing the Boys and Girls Club's position on taking children to events that harm animals.