Cruelty at the Pendleton Round-Up is Obscene

The Air Force recently denied the Round-Up’s request for a flyover, citing a new policy that restricts flyovers to national sporting events and patriotic holiday events.

The rodeo is pretty upset at losing this government welfare. You can read the entire article here 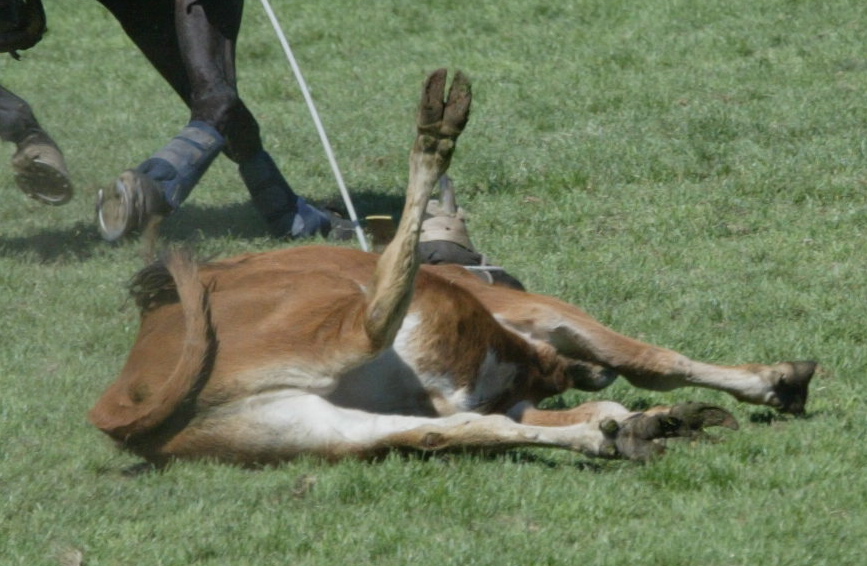 The Pendleton Round-Up Rodeo in Pendleton, Oregon is one of the most (in)famous rodeos in the world, just slightly less known than the Cheyenne Frontier Days Rodeo that SHARK investigators have been dealing blows to since 2005.

Pendleton is infamous not only for its steer busting, which claims more victims every year, but also for its slippery, hard grass arena. This deadly combination led to a particularly horrific incident in 2007 in which a steer had his neck broken during the steer busting event - currently being called single steer roping. Shown below, the steer's neck was fatally contorted, and then the animal was dragged away to the sound of the rodeo announcer blathering cheerily about his condition. 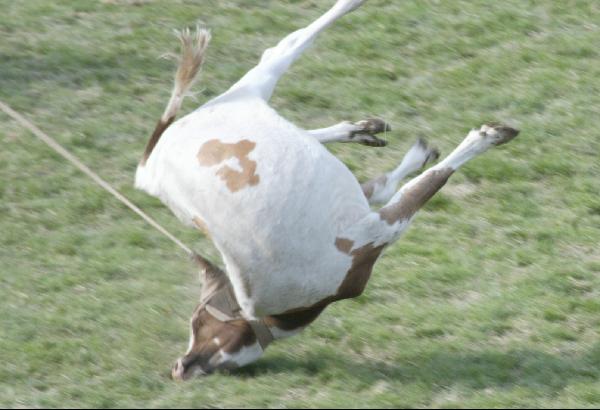 The dying animal went into death spasms in the arena while the announcer joked about the steer supposedly struggling to free himself after the contestant had tied his legs. The announcer also promised to update the audience about the steer's condition, which of course he never did. Watch the video: "2007 Pendleton - A Steer Dies, an Announcer Lies."

At the 2007 Round-Up a double decker Sankey Rodeo truck/trailer (from Montana), brought in horses to be used at the rodeo. Transporting horses in double-decker trailers is illegal in many states for humane reasons. While it may not be illegal in Oregon, it is certainly a cruel way for rodeo people to treat their prized "animal athletes".

Dear PRCA -- Is this the Hip or the Shoulder?

PRCA Humane Rule 10.1.5 states: "In the riding events, use of prods and similar devices is prohibited. The only exception is a known chute-stalling animal, only with the contestants and contractors approval, and shall be administered only by a qualified member in the hip or shoulder."

The question is simply, has the PRCA redefined a horse’s face as the hip or the shoulder?

Ike Sankey is one of the PRCA’s top stock contractors and the Pendleton Round-Up is one of the jewels of the rodeo industry. So why are so many rules violated at this top-tier PRCA event?

Ike Sankey was involved in the shocking of dozens of horses at the 2007 Pendleton Round-Up, either shocking them himself, or handing off the Hot-Shot prod to others and receiving it immediately after it was used by others. Despite his repeated and flagrant violation of the PRCA's own 'humane rules', Mr. Sankey has been nominated for the 2007 Stock Contractor of the Year by this corrupt organization.

Calves, cows, horses and bulls also paid the price for Pendleton's cruelty. So much cruelty and incredibly it's all committed against a backdrop of patriotism! Why, even the Oregon Air National Guard gets into the act by doing a couple flyovers of the arena on the last day of the rodeo. More of your tax dollars not only wasted, but spent to prop-up evil people committing heinous acts of abuse.

SHARK investigators have been kicked out of some rodeos, have been physically threatened and even accosted, all for exposing rules violations, animal injuries, and even rodeo announcers lying to conceal animal injuries.

Media friendly to the rodeo industry have refused to expose the abuses. But, the days of rodeos injuring and killing animals without the public knowing about it, are indeed numbered. These are just a few of the videos of rodeos SHARK has investigated--there are many more on YouTube.com.

Coca-Cola denies sponsoring rodeo, but this photo tells the truth. The print at the bottom of the ad states: "Copyright 2007 The Coca-Cola Company." Photo from the 2007 Pendleton Round-Up Rodeo, where SHARK documented numerous violations of their "humane rules" and blatant abuse.

What Can You Do To Help?

Go to CorporateThugs.com and contact the unethical corporations that give money to this animal-abusing industry. Without the support of businesses such as Coca-Cola, Dodge, Wrangler, and others, the rodeo industry would be dead--instead of the untold numbers of horses, calves, steers, cows, bulls, and goats that are its victims.