LARAMIE, Wyo. (AP) John Schabron isn't sure what the proper penalty should be for the man whose drunken driving caused the death of Schabron's 20 year old son, Nick, and seven other University of Wyoming runners.

But of this he is certain: One penalty for all eight victims is not enough.

Clinton Haskins, 21, of Maybell, Colo., a UW student, changed his plea to guilty Thursday to eight counts of aggravated vehicular homicide for the head on crash Sept. 16 that killed the athletes, all members of the UW men's cross country team.

In a plea deal, prosecutor Cal Rerucha agreed to recommend 14 to 20 years in prison for each count but with the terms to be served at the same time.

"I feel it should not be concurrent but consecutive," Schabron said. "I'm not saying a 100 year sentence, but the way it's structured is symbolic to me."

Schabron said he isn't being vindictive, but that "it's got to be a real sentence."

"That's another life that doesn't need to be destroyed because of this," he said, "but it's not right lumping all the boys together for sentencing purposes." 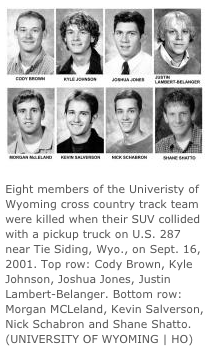 "We watched the movie "Pearl Harbor" the other day, and it showed a lot of 20 year old men dying, but it doesn't dwell on what that does to the parents," he said.

Haskins took the stand during a 15 minute hearing and was asked by his attorney, Michael Krampner, if he was responsible for the wreck.

"If I had not drove, they would be alive," Haskins replied, looking at family members of the victims.

As part of the plea agreement, the defense will ask for 10 to 15 years per count, which would run concurrently, just like the prosecution recommendation.

Haskins recalled the crash in tears, saying he was drinking with friends the night of the wreck and that he decided to drive to Fort Collins, Colo. He agreed with a report that indicated his blood alcohol level was 0.16 percent, above the legal limit of 0.10, and said he was too drunk to drive.

His parents and other family members and friends also were at the hearing. Many relatives of the victims also sat in the nearly packed courtroom.

Restitution and fines would be determined by District Judge Jeffrey A. Donnell, according to Donnell's law clerk, Tori Kricken. Donnell ordered a pre sentence investigation and reserved the right to reject the agreement depending on the investigation results.

If Donnell rejects the plea arrangement, Haskins could withdraw his pleas and go to trial. Trial is now scheduled for Feb. 25, but it likely will be postponed to allow time for the background check.

Haskins' southbound 1995 one ton Chevrolet pickup truck veered into the oncoming lane of U.S. 287 about 17 miles south of Laramie about 1:30 a.m. on Sept. 16. It collided head on with a 1990 Jeep Wagoneer carrying the eight UW track and cross country athletes.

Schabron, who was at the wheel, and the others were killed instantly. Haskins, a UW senior and rodeo athlete, survived but was hospitalized for five days with a concussion and other injuries.

On campus, students expressed relief that a trial likely would be avoided.

Chad Ransom, 20, a junior from Jackson, said the judge can send a strong message with an appropriate sentence.

"I think he has the opportunity to set a good example for college students in general, where this is a pretty big problem," he said.

Barbara Wallace, a senior from Laramie, said she was glad Haskins changed his plea because the evidence "was pretty hard to refute."

"It will save not only anguish for the Haskins family but also the families of the victims, and the healing process can honestly start to begin now," she said.

Gaylene Thrailkill, 39, a sophomore from Laramie, said her daughter, Aimsley, knew three of the runners and was a classmate of one, Johnson, from sixth grade through high school in Riverton.

"I think it's sad that nine lives were ruined that day," she said.

Of Haskins, she said, "I don't doubt he's a good kid, but those boys who died were good kids too. It's just a tragedy all the way around."

UW President Philip L. Dubois said the tragedy touched the lives of people on campus, across the state and among runners in the United States and Canada. He said he hopes the victims' families are spared a lengthy court process.

"I hope that a swift and just conclusion to this ordeal will spare them the additional heartache of a lengthy, and undoubtedly painful, legal proceeding," he said.