Cruelty is His Business

Meet Cotton Rosser, owner of the Flying U Rodeo Company.

Cotton is what the rodeo industry calls a “stock contractor”. His company supplies the livestock for rodeos and in many instances his company will also produce the entire rodeo. Cotton Rosser is one of the oldest and most well-known names in all of rodeo. Rosser has been called the P. T. Barnum of Rodeo…..among other things. Some of the rodeos that Cotton supplies animals for are the National Finals Rodeo, the Rowell Ranch Rodeo, the Reno Rodeo, the Houston Livestock Show and Rodeo, and the Grand National Rodeo in San Francisco to name just a few.

The PRCA has lavished many, many awards on Cotton. In fact, in 1995 he was inducted into the PRCA’s ProRodeo Hall of Fame. Cotton has also served on the PRCA Board of Directors.

You would expect a man with all of these awards and accomplishments to be above reproach and an example of the very best the PRCA has to offer, right?

Well, you be the judge of that.

Cotton is well known for his propensity to electroshock animals to force them to perform. The following is a description of an event from an article about Cotton entitled “The Electric Horseman”:

At a rodeo in the Anaheim Pond, a sorrel mare named Classic Velvet ran at full gallop—an estimated 35 mph—toward a chute she must have assumed was open. The horse was wrong. The chute's heavy metal rear gate was closed, and the horse smashed her head on it, crumpling to the ground and dying as 6,000 spectators looked on in horror. Classic Velvet lay there, dead, for six or seven minutes before personnel of the Flying U Rodeo, the event's promoter, were able to remove her.

Children cried; the crowd wandered away. Horse lovers fumed. A Laguna Niguel horse owner named Judy Foster accused the Flying U of "prodding the horses and hyping them up . . . I have no problem with rodeos, but I'm upset how [the horses] were treated."

Other witnesses included a member of the Los Angeles chapter of the Society for the Prevention of Cruelty to Animals (SPCA), who called it the worst accident he'd ever seen in a rodeo arena and demanded immediate reforms to the sport.

August 4, 2015 Flying U kills horse, but not before it was abused in Wild Horse Race

The California Mid-State Fair wrapped up this weekend, but not without some controversy – a horse had to be euthanized after a rodeo event during which it was injured.

It happened during the Wild Horse Race performance put on by the Flying U Rodeo Company. Cheyenne Deitrich, the company's director of animal welfare, said the horse suffered a displaced fetlock.

“I sat in shock and paralyzed with anger as the team saddled and rode him to the finish,” a rodeo competitor who wished to remain anonymous said.

Others emailed KSBY News calling the cowboys’ actions “inhumane,” “neglect” and even “mutilation.”

Watch as Cotton Rosser henchman Donny Castle secretly shocks horses with 10,000 volts through a fake glove on his right hand as he activates the prod with his left hand. This violates even the PRCA's own lax rules, but the judges say nothing. Just business as usual for Cotton Rosser and the PRCA.

The abuse was so egregious even rodeo sponsor the Reno Gazette-Journal came out with an editorial condemning the practice. Read the Op-Ed here. 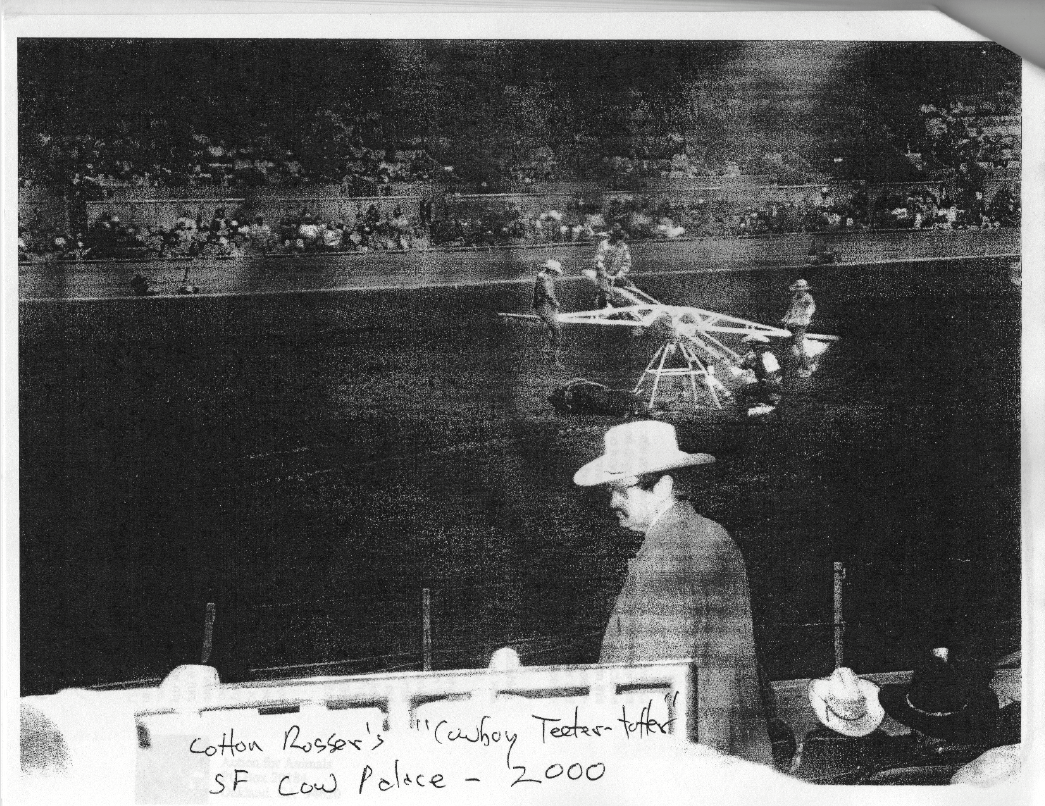 This device is known as a Bull Teeter-Totter. Rosser claims to have invented it. In 2000, at the Grand National Rodeo in San Francisco, a bull ran into this devise and died on the spot. Mia Tauriac wrote a very heart-wrenching eye witness account of the bull's death here:

In fact, just before the Flying Teeter Totter they let two horses into the arena to run while the announcer explained that there is absolutely no animal cruelty in the Rodeo. Well Mr. Mendes, after seeing that bull break his neck, and die in the arena, and then hear the announcer contradict himself by saying by saying the bull was knocked out cold, but don't worry, this has happened hundreds of times, I have to question animal cruelty.

On May 17th and 18th, 2008 at the Rowell Ranch Rodeo in Castro Valley, California, SHARK’s video cameras rolled as Flying U personnel secretly shocked the horses with 5,000 volts of painful electricity in an attempt to make these grand animals appear rank and wild. The person doing the shocking was none other than Reno Rosser under the watchful eye of his father Cotton Rosser. Click here to read the entire story. 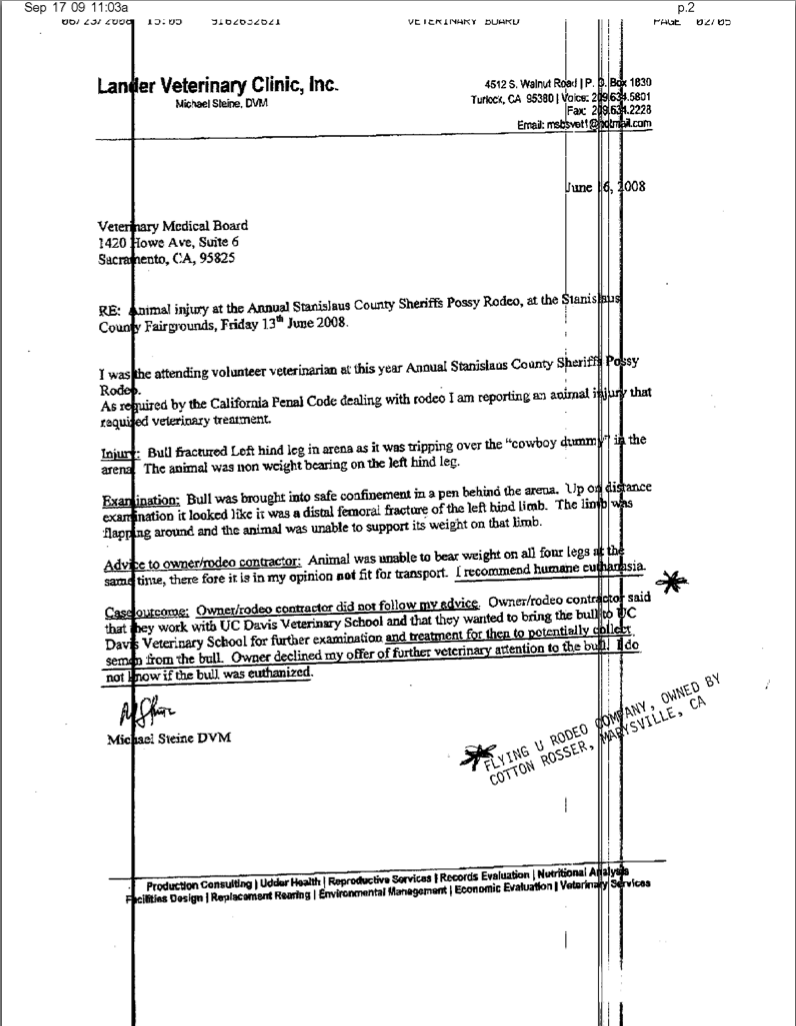 At the 2008 Stanislaus County Sheriff's Posse Rodeo in Turlock, CA a bull was injured tripping over a "cowboy dummy" left in the arena. The bull was unable to place any weight on his left rear leg and the limb was observed to be "flapping around". Upon later examination by a veterinarian it was determined that the bull had a "distal femoral fracture of the left hind limb". The Vet recommended immediate humane euthanasia. Cotton Rosser choose to ignore this advice.

Why would Cotton Rosser choose to prolong the suffering of one of his "animal athletes" that he claims to love and respect? For one reason only. Money. Cotton Rosser ignored the Vet's advice and extended the agony of this fatally injured animal so he could travel across California for the sole purpose of collecting semen from this bull. Rosser claims to treat his animals like family members, I'd be very nervous about breaking my leg if I belonged to that family.

This is just one more example of the lies that rodeo people and Cotton Rosser specifically tell about the rodeo industry. Money takes precedence over humane treatment every single time. 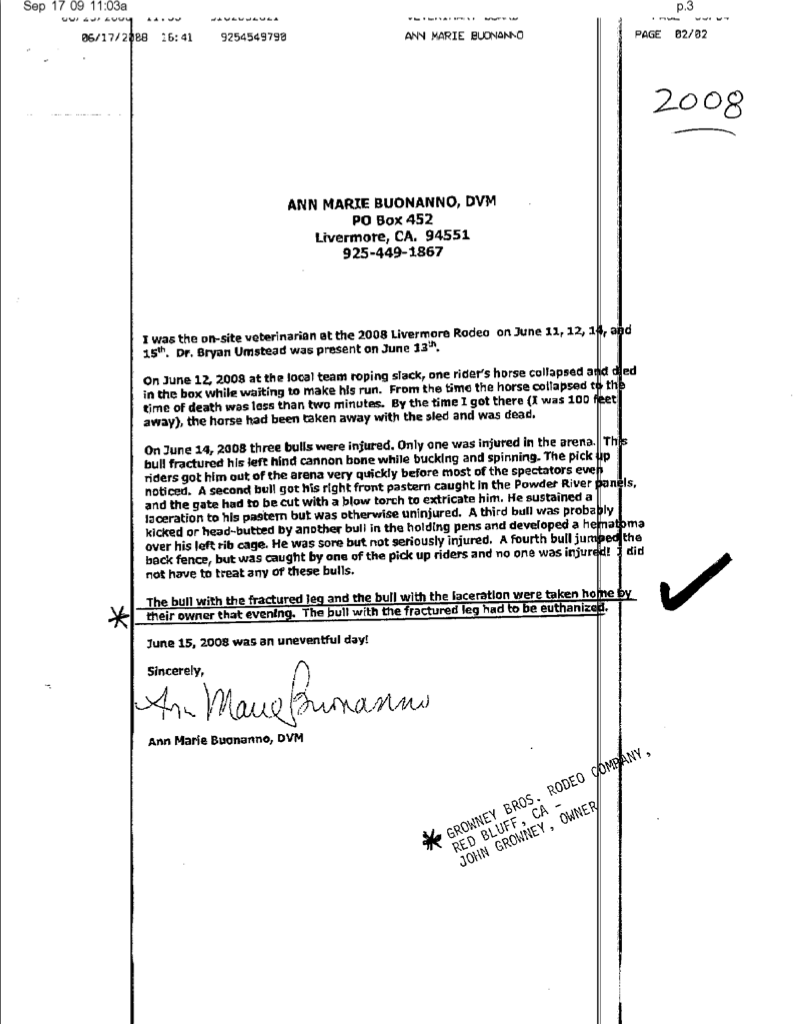 At the 2008 Livermore Rodeo in Livermore, CA three bulls are seriously injured - one so badly it had to be immediately killed. A fourth bull escaped the pens.

In addition, during the Team Roping a horse died on the spot. He had to be dragged out on a sled.

The bull that had to be killed fractured his left hind leg while spinning in the arena.

The veterinarian noted that "the pick up riders got him out of the arena very quickly before most of the spectators even noticed."

She went on to write: "The bull with the fractured leg had to be euthanized"

This is yet more evidence of the shockingly large amount of animal injuries that take place in rodeo and evidence that most of these injuries go completely unnoticed by the spectators.

Rosser Further Exposed in the Media

Here are even more newspaper stories about Cotton Rosser and his use of electricity on animals to make them perform: