These are just some of the campaigns and victories SHARK has achieved in 2015.  Please click HERE to download our full mailer.
To make a donation to help us continue our vital work for animals, please click HERE.
Dear Friends,

Looking back at SHARK’s work this past year, we see a long list of victories - accomplishments that happened only because of our supporters. We must note that among our very best supporters have been Bob Barker, Last Chance for Animals, and the Mickey Petersen Charitable Fund. We thank them and all our supporters for making this year possible. Now here is what has happened in 2015. 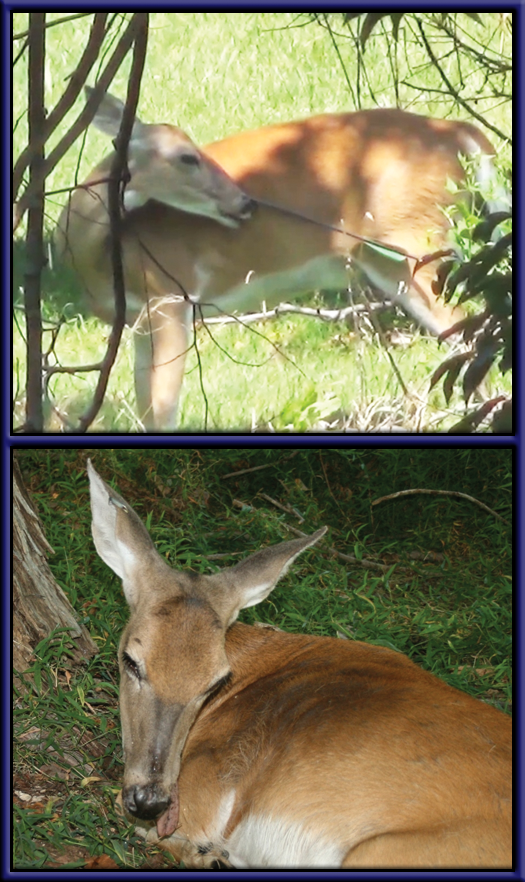 Top:  Grace trying to clean herself with the arrow protruding from her face. Bottom: Grace, still tranquilized, after the arrow was removed
In our last mailer we told you of a young deer in New Jersey we named Grace. Shot in the face by a bowhunter in December 2014, Grace somehow survived for ten months
with the arrow embedded in her nose.

Our videos of Grace received wide media coverage, and a petition was started that garnered more than 100,000 signatures! This put tremendous pressure on the NJ Division of Fish and Wildlife (FW), which finally took action after months of ignoring her.

We are overjoyed to tell you that on September 1st, Grace was tranquilized and the accursed arrow was sheared off!  A local resident is keeping an eye on Grace and her fawn, and both are alive and well.
If not for our video and campaign for Grace, and the pressure brought upon FW, she would either be suffering to this day with that arrow in her face, or she would have finally succumbed and died. 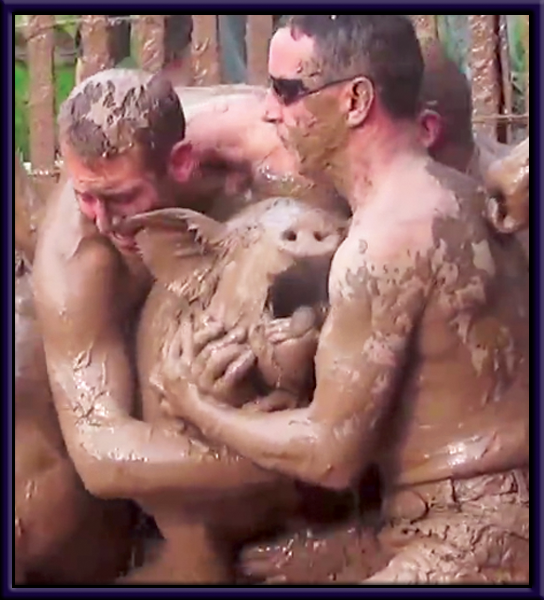 In the summer of 2014, SHARK’s team filmed a cruel “Pig Rassle” held in Wisconsin by the St. Patrick Parish. Our video of the violence committed against pigs was seen more than a quarter of a million times. We held press conferences in Wisconsin and challenged the Diocese of Green Bay to shut this cruelty down.
In 2015, after decades of abuse, the church finally relented and the event was shut down!

Maryland-based Fish Feel alerted us that a cruel cownose ray killing contest was to be held in Maryland on June 13th, 2015. SHARK was out in force with two teams filming as pregnant rays were shot at point-blank range with arrows then beaten mercilessly with metal bats. The rays were not killed for food. After the slaughter was over and the bodies were weighed, they were illegally dumped back into the river.
Our video of the heinous slaughter of these pregnant animals went viral and a petition to end these killing contests received more than 100,000 signatures. We are now working with Fish Feel on legislation banning such vile tournaments in Maryland. SHARK’s new boat, the Bob & Nancy, will play a big part in documentation of these killing contests in 2016.

First a quick history on this sordid case of cruelty, cowardice and corruption. In the summer of 2014, numerous animal protection and welfare groups were sent information about a live pigeon shoot fundraiser for Jim Inhofe, the senior US senator from Oklahoma. Some of the groups that received that letter raise more than a million dollars a week, yet not one of them went to the effort to send someone to the shoot to expose it. Only SHARK, which operates on a shoe-string budget, took direct action. SHARK investigator Stu Chaifetz attended the fundraiser undercover.
The video Stu took of that vicious slaughter went viral, exposing Inhofe’s sadistic cruelty nationwide and beyond, but that was just the beginning. 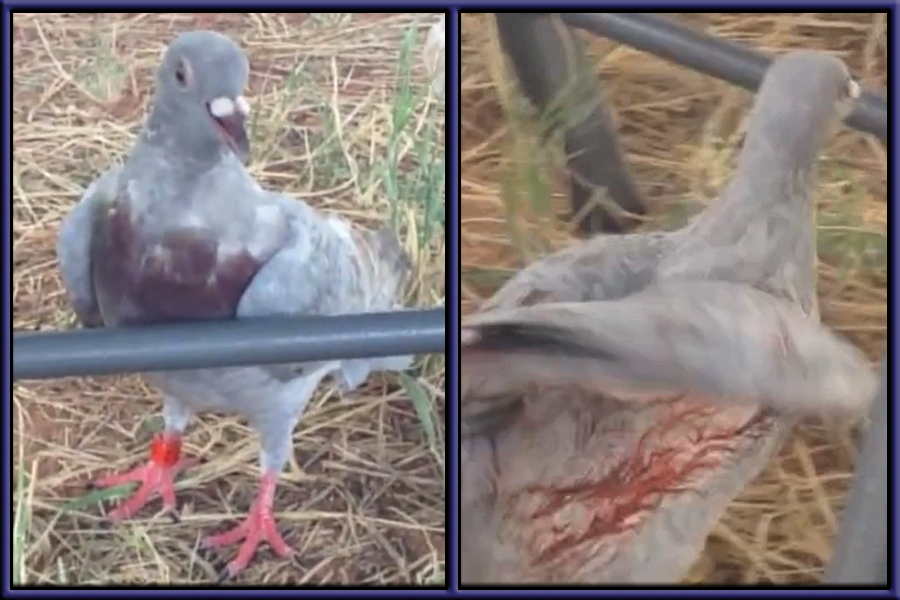 A victim of the Inhofe fundraiser

People from the US Bureau of Reclamation (BOR) saw SHARK’s  ideo and realized that the property Inhofe used was federal land. In documents and photographs SHARK obtained from the BOR through the Freedom of Information Act, it was revealed that not only had Inhofe violated numerous laws by his use of federal land, but that additional pigeon shoots were being regularly held on the property. Illegal hunting blinds were also discovered there.

BOR ordered the brick structure and hunting sites be torn down, and warned the manager of the property to never use the property like that again. That means that thousands of innocent birds and wild animals will no longer be shot and tortured for fun on that property again!

Last January, the NY Times exposed USMARC for it’s horrific abuse and high fatality rates. In November, SHARK teamed up with Last Chance for Animals (LCA) to learn more, driving to Nebraska to film the facility. 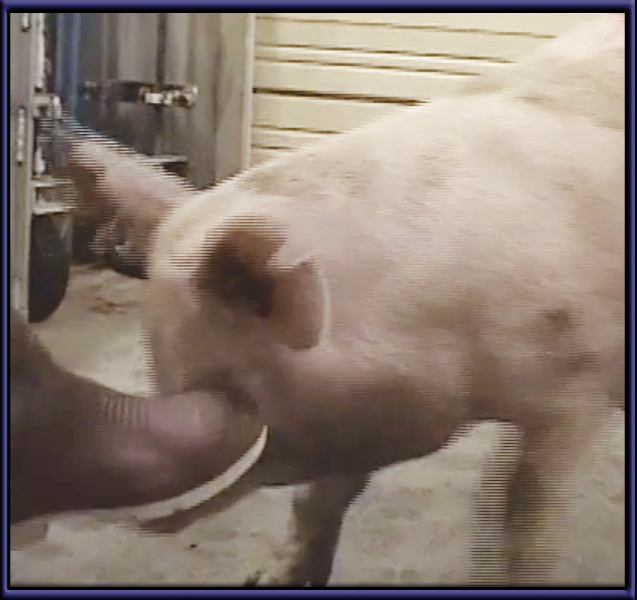 In video obtained from USMARC under the Freedom of Information Act, a pig was kicked and slapped
Stay tuned, as SHARK and LCA’s campaign against this tax-payer funded house of horrors is just getting started. The stories of suffering are deeply disturbing, but only by making them public will we be able to stop the indefensible cruelty.

They agreed and said they will not host another  rodeo next year.  We applaud the Sussex Christian School for choosing not to hold another cruel fundraiser! 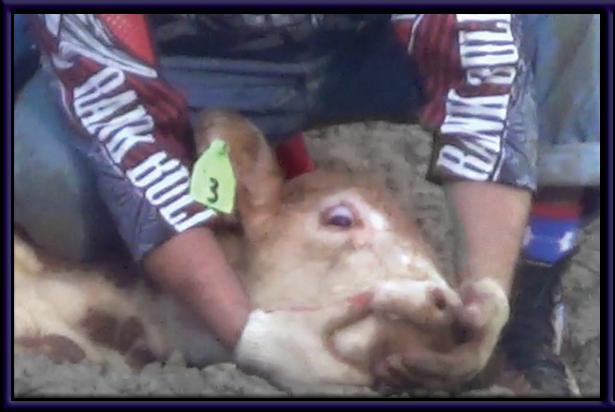 SHARK went undercover at a cruel Mexican style rodeo on May  7, 2015, at the DreamPark Equestrian Center in Gloucester County, NJ. Our video exposed brutal acts of animal cruelty and abuse of alcohol that lead to the rodeo being banned from the facility and the NJ Division of Alcoholic Beverage Control pulling all their permits to sell beer, which is a major revenue producer for the rodeo. 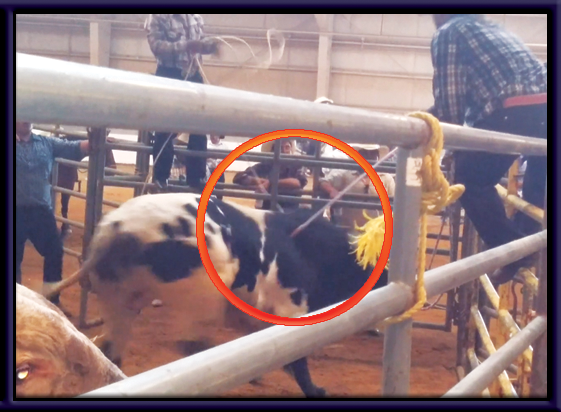 This bull was mercilessly whipped and electro-shocked

Ask yourself this -  What organizations were willing to take on a powerful, corrupt US Senator like Jim Inhofe? The answer is only SHARK.

Who fights for not only for the hundreds of thousands of innocent pigeons used in live pigeon shoots, and also for the life of one suffering deer, because we know that each and every animal is unique and deserves protection? SHARK does.

What organization has scored so many victories and saved so many lives while having only five full-time investigators (only four of whom are paid for their hard work)? Again, the answer is SHARK.

And to top it all off, what organizations do you know has accomplished so much while having so little money? The answer is SHARK. And we are struggling every day to find the resources to continue our work.

Please re-read this mailer again and let the breadth and significance of our work sink in. Throughout the US and beyond, SHARK goes where the violence is happening, and we put ourselves on the line between the abusers and their victims.

I implore you, in this season of giving, to consider making a generous donation so that we may fight even harder. Be part of the change you want. The lives we save will be the lives you save also.

Steve Hindi
Founder and President
You can either mail a check to:
SHARK
PO Box 28
Geneva, IL 60134
or donate online HERE.