We are saddened to announce that legislation in Vermont that will reduce cage sizes for dogs and cats has been signed into law by Governor Scott. This means that businesses that treat dogs as commodities, such as puppy mills, will benefit because they can now keep more dogs in smaller cages. This is a true tragedy, and one that could have been avoided.

Two prominent VT activists reached out to SHARK and asked for our help, as the Humane Society of the United States (HSUS) had endorsed and supported the legislation and the situation looked dire. These two women, one a veterinarian with 30 years experience, and the other one of VT’s senior humane law enforcement officers, saw how devastating the bill would be and fought with us to try to stop it.

It’s not that we failed to stop the bill, but that HSUS failed VT’s animals by using their strength and political power to make sure the bill would become law. That is an outrage and a disgrace.

As many of you know, we have been very publicly calling on HSUS to reverse their stand after we carefully explained how the legislation would hurt dogs and cats. We even released a video with evidence from one of VT’s largest newspapers showing that cage sizes would be reduced, along with audio of the bill’s sponsor, a former vivisector, who was admitted cages sizes would be reduced. The evidence was so clear that you would have to deliberately cover your own eyes and ears to avoid it. And that’s exactly what HSUS did. 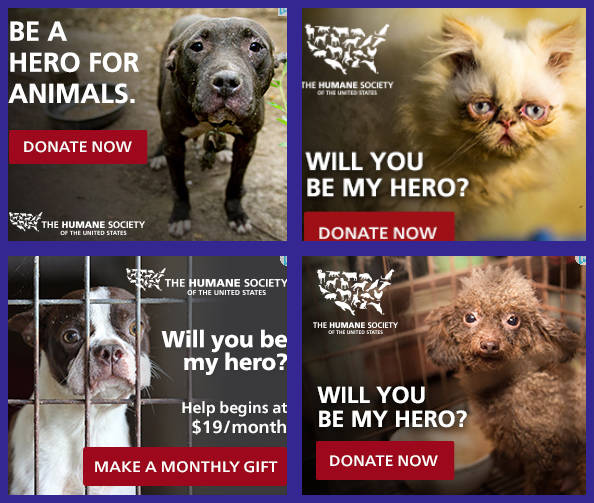 Online ads from HSUS. The irony of them asking for money using pictures of dogs in cages while their pro-puppy mill bill was just made into law is truly bitter. HSUS is no hero for animals

We initially reached out to Wayne Pacelle privately and then publicly when he refused to acknowledge the fact that cages sizes would be reduced. In the end, HSUS was well aware of this fact, but they refused to take action because it would have meant they would have to admit they made a mistake.

The humane law enforcement officer made one last attempt to convince HSUS President Wayne Pacelle of how the bad the bill was and wrote this to him:

Could we please speak soon? If the Governor doesn't veto this legislation, it will prove deadly for some dogs this winter and increase the suffering at our puppy mills. Your retraction of support for this legislation as it stands now is critical.

Pacelle, who had ignored multiple attempts to warn him about the bill simply replied:

Thanks for writing.  The governor signed the bill on Monday.

I am sorry we see this issue so differently.

Wayne
When the VT veterinarian wrote to Eric Bernthal, Chair of the HSUS board, this is what he said:

I agree that the parts of the bill that deal with cage size are disappointing, and I get that there are other ways that could have strengthened the bill as well (as you point out). But all too often, intransigence on a bill dooms it to fail altogether, and the many benefits it would bring are totally lost. On balance, I’m comfortable that the bill is a positive change for animals in Vermont.

Bernthal may be comfortable, but the dogs and cats he is condemning to small cages certainly won't be. What he and HSUS failed to comprehend is that you have no right to create cruelty because you think it’s better to go along to get along, rather than do what is the right thing.

We didn’t ask for this fight with HSUS, but when we were asked for help, we saw that this bill was bad for animals and we knew we had to do what we could to help them. As for HSUS, we suspect that will soon forget the damage they caused and move on. SHARK and the people of VT, however, will never forget the day HSUS sold out tens-of-thousands of dogs and cats just so they could claim a victory and raise money off of it.
In the end, it will be the dogs and cats piled into small cages so they can be bred for money who are the victims here. Remember them the next time HSUS asks you for money. Remember how little their lives mattered to people at HSUS who have lost their moral compass while becoming millionaires, and who have damned these innocent dogs and cats to a life of hell.