This past June and July 2020, SHARK Investigators, with help from our partners at the Humane Farming Association (HFA), exposed and shut down four major criminal cockfighting operations in Kentucky. This represents the most successful anti-cockfighting campaign ever launched by animal protection groups - and it's just the beginning! 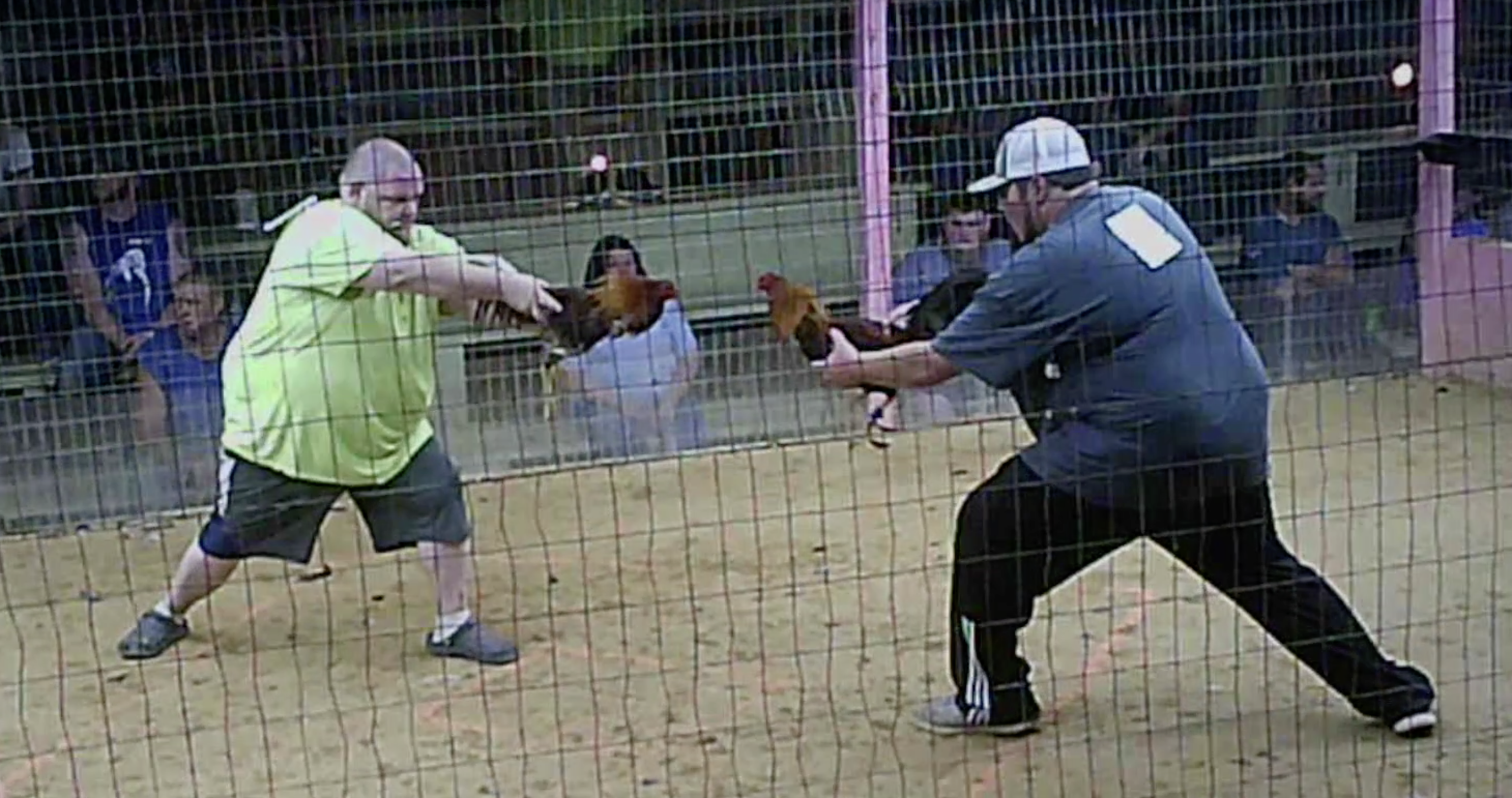 From SHARK's undercover video at a Kentucky cockfight
Due to roosters molting, cockfights stop after July and restart in the late fall. SHARK has used this downtime to seek out cockfighting locations across our country. Thanks to information received through our cockfighting tipline, and our own investigative work, we have uncovered many previously hidden cockfighting pits and we are ready to expose them all!

Cockfighting has been illegal nationwide for more than a decade, so an effort like this should have happened long ago, but the large, rich organizations simply couldn't be bothered. It’s going to take an enormous amount of time, energy and money - and we cannot accomplish this without your help.

Please send a generous donation to fund this important campaign that will save untold thousands of lives!
Corrupt Police Protecting Cockfighters

Click Here to Watch Our New Video, "Cop Posts Death Threat Against SHARK."
This will be a difficult and intensive campaign, and there are real dangers involved.

The biggest problem is that, in rural counties, local sheriffs and other police forces are fully aware of illegal cockfighting operations, and yet do nothing to stop it. This isn’t conjecture on our part…we have real evidence of it. In the worst cases, the police are part of the cockfighting fraternity. 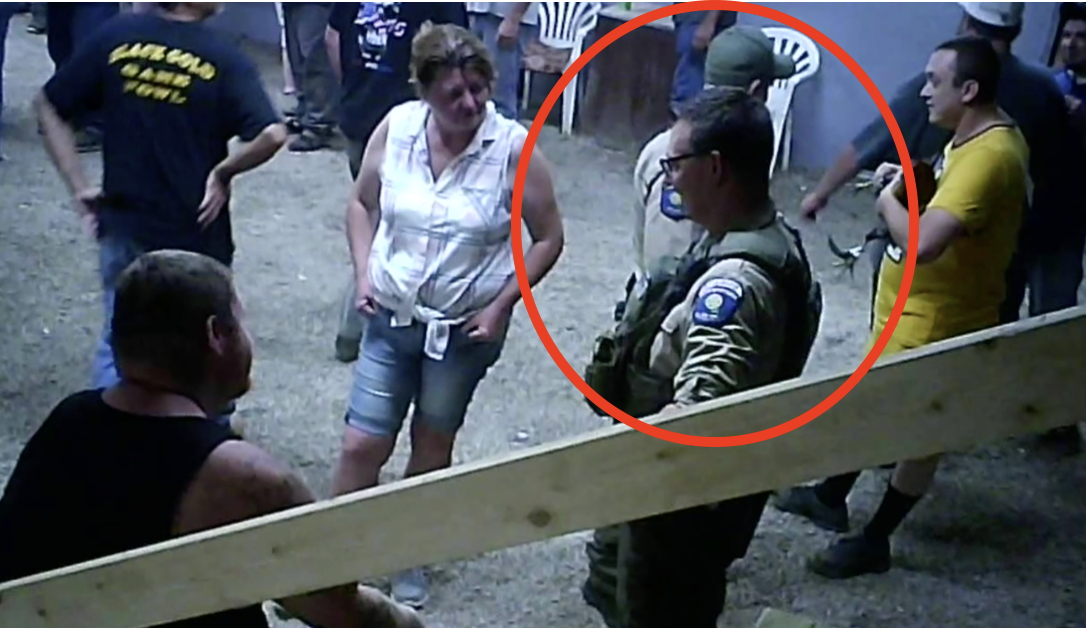 In this text message written by KY State Police Trooper Logan Wolfe, he states explicitly that the KY State Police and the Clay County Sheriff let the owner of Laurel Creek cockfighting pit break the law for years. 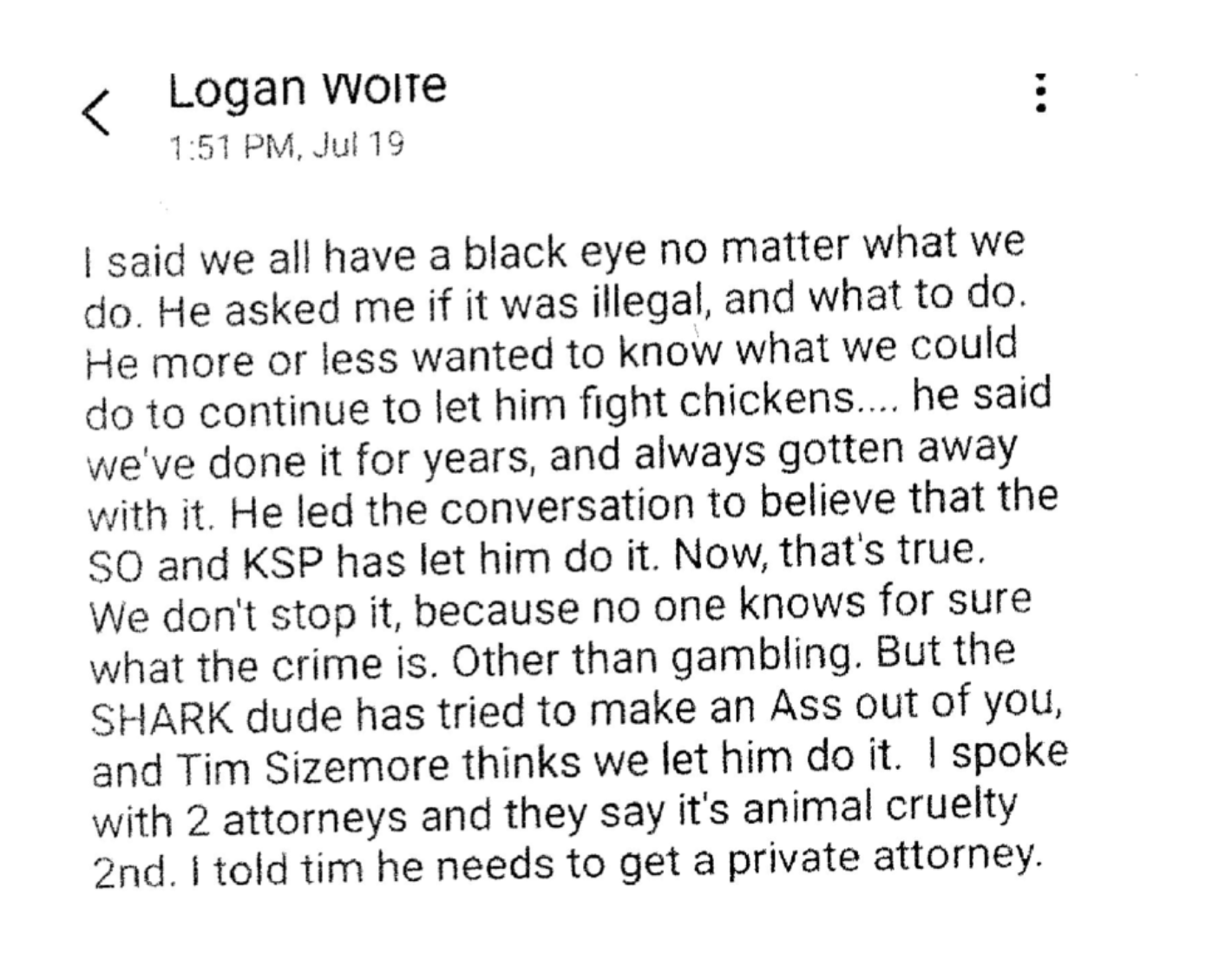 As I said before, operations such as Laurel Creek are a major criminal operation. In addition to cockfighting being illegal, there is illegal gambling going on and drugs are often part of the mix. Here we have a direct admission that the two police departments - including the state police - knowingly allowed it to continue for years.

We know that there are good police departments that have gone after cockfights, and in many states they take this very seriously. Unfortunately there are also bad police departments who act on behalf of the cockfighters, and when we find them they must be exposed.
Death Threats from Cockfighters…And the Police
We also said there was danger involved in going after cockfights. In the more than three-decades SHARK since SHARK was formed, we have never received as many death threats as we have since we've exposed and shutdown Kentucky cockfights.

One cockfighter who made numerous phone death threats has been charged with multiple felonies. You can see that story HERE. 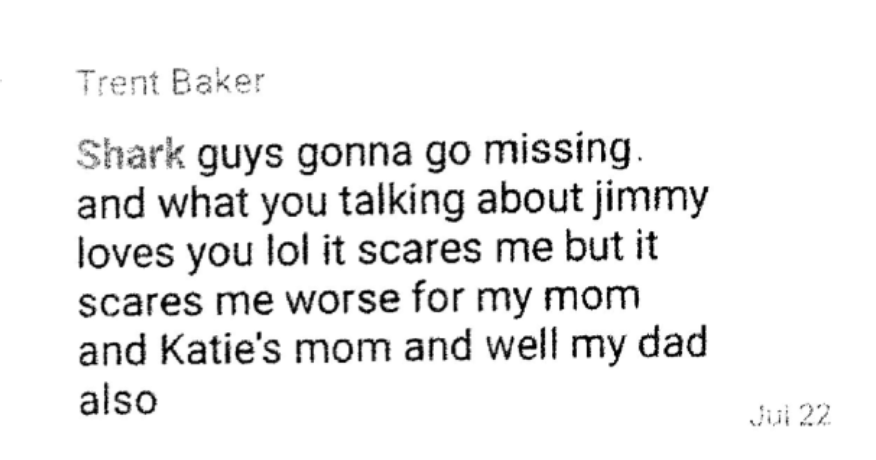 “Shark guys gonna go missing.”  This is something we would expect from a deranged cockfighter but not from a high ranking member of a Sheriff's department.  It is revolting to see a man who claims to be law enforcement talking about SHARK investigators going missing. Equally disturbing is that no action has been taken against this bad cop.

The records we recieved included stunning information, but we know the sheriff has withheld even more damning information. That’s why we are so excited to be working with the KY law firm of BATEY BROPHY, PLLC to get everything that was withheld or illegally scrubbed from the request. Stay tuned for more on that, because so far we only have the tip of the iceberg.

SHARK and the Humane Farming Association are demanding an investigation into the Clay County Sheriff’s Department, the Manchester Police Department and the Kentucky State Police.

These threats have to be taken seriously, but we cannot and will not back way from this fight. Some people have suggested that this campaign is too dangerous. That is all the more reason it must go forward. We cannot allow animal abusing criminals get off just because they are "too dangerous." There is only one way to go - and that is forward.

This campaign will require that we crisscross the country over and over, hammering away at both the cockfighters, and the corrupt police who defend them. The physical and mental toll on our small team will be enormous, but there are great victories for animals within our reach. Failure is not an option.

Tragically for our nonhuman friends, too many animal protection groups care more about fundraising and self-promotion than doing the hard work of saving lives. Organizations like the Humane Society of the United States, as well as many others, brag about the number of offices they have nationwide, but those offices do nothing about horrendous and even illegal animal abuse in their localities. The people who call us with information about cockfighting have almost always called HSUS or PETA, or some other larger organization first, and received no response.

That’s not our way, and it never will be. If these other groups don’t want to take the risk in shutting down cockfights, then we call on them to join with us by financially supporting our efforts.
The Great Battle Against Cockfighting Begins
• SHARK and HFA have already made history by exposing and shutting down four major cockfighting operations in just a handful of weeks.

• We are now ready to move against many more criminal cockfights across our country.

SHARK is under direct threat by both cockfighters and corrupt police departments, but that isn’t going to stop us. We invite all of you to join this great battle against cockfighting by making sure our investigators have the best equipment and support network possible, and that we are able to travel from one end of the country to the other going after these disgusting and cruel cockfights.
Please click the banner below to support our efforts to save lives!