It's not hard for anyone with a brain and a heart to understand what's wrong with clotheslining a baby animal, body slamming it to the ground and tying its legs so it cannot move. If this were done to a puppy or kitten, the offender would be charged with crimes and likely jailed. But in the world of rodeo it's "entertainment."

This event used to be called Calf Roping, because that's what it is. But in the cowardly world of PRCA rodeo where bullshit and lies reign supreme and the idea of tradition is used simply as a convenient cover when is suits them, the event was renamed Tie Down Roping in an effort to mask the true nature of this disgusting activity. Two to three month-old calves are clotheslined, body slammed and tied for points. The calves are considered expendable. While the name has changed, the cruelty of the abusers is the same.

Video of a calf being mortally injured

Incredibly, rodeo people have no problem with committing an act of cruelty and cowardice against a baby cow during calf roping. A roping calf is only two to three months old. After that, they become too heavy for the "macho" cowboys to handle.

Calf-roping on the range bears no resemblance to Calf Roping at the rodeo. In the rodeo, it is a timed event, and indefensible abuse to the calf is the price paid for a competitive time. On the range, calves are roped carefully, and slowly brought to a halt.

On the range, calves are roped for care, or to protect them from danger. In rodeos, calves are endangered for amusement. This "sport" violently and specifically preys upon baby animals, and then calls itself "family entertainment!"

Read about how rodeo managed to make a cruel event even worse with calf jerk-downs.

After having his tail painfully twisted and raked over a fence rail, this calf ran out of the chute at top speed to escape his torment. The calf is roped so violently she becomes airborne before slamming into the ground. This process can break the calf's neck, back or legs. 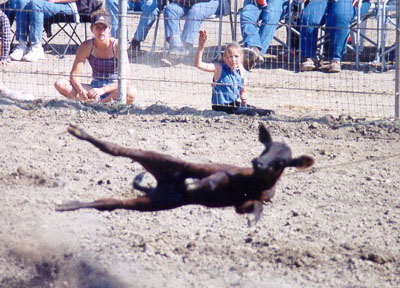 After hitting the ground, the contestant runs to the calf, picks her up and body slams her again, knocking the wind out of her so he can tie her legs. 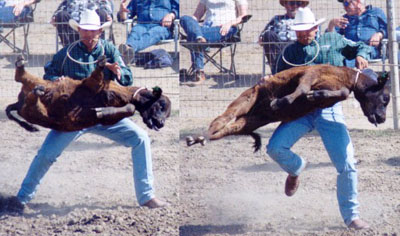 The calf, eyes bulging in terror, gasps for air with the rope stretched tight. Horses used in calf roping are trained to keep the rope pulled tight, or even to pulled the calf on the ground, just so they cannot break free. If they can breathe, the calves cry pitifully, as you would expect from any terrified baby. 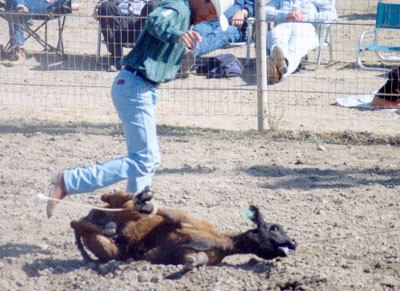 The violent contortion of the calf's back during roping may result in injury or death. 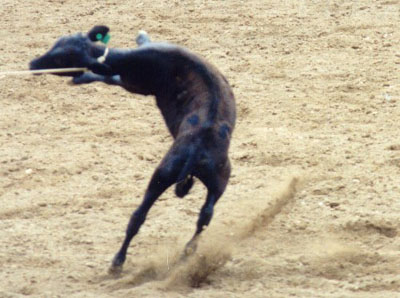 Here is footage of what an actual "Jerk-down" looks like.