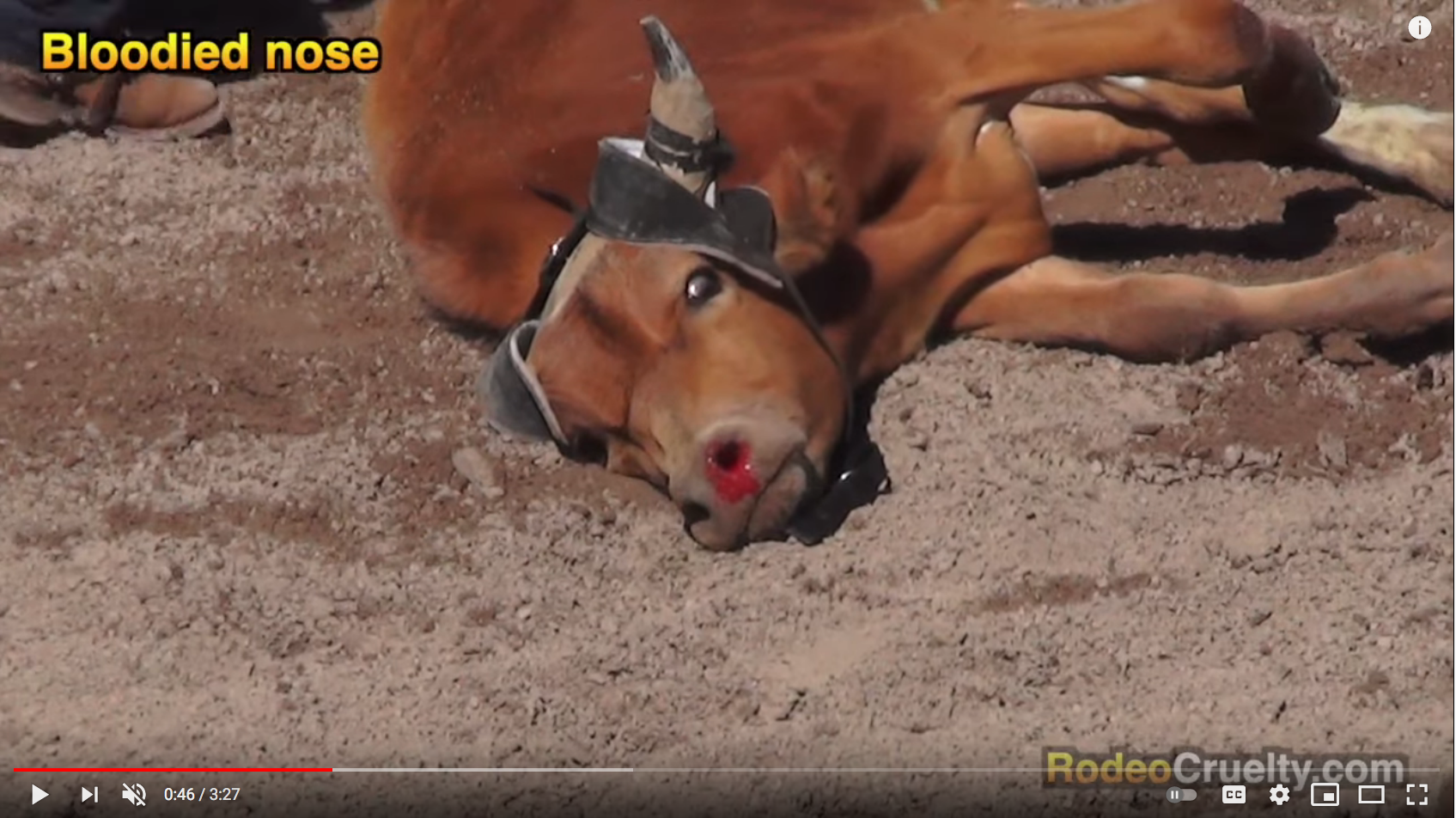 On November 13th and 14th, 2009 at the PRCA’s National Finals Steer Roping in Guthrie, OK while injured animals were being removed from the arena, rodeo announcer Charlie Throckmorton falsely claimed the following:

"We work in complete harmony with the American Humane Association."

Mr. Throckmorton’s claim is an outright lie. After learning of the claim, the American Humane Association issued the following statement:

"The rodeo announcer completely misspoke. The American Humane Association has no formal relationship or working arrangement at all with the Professional Rodeo Cowboys Association, nor have we ever given permission for or approval of such an announcement. We do not monitor the activities at rodeos and we do not have any oversight of rodeo events."

Turns out Charlie Throckmorton is just a liar.

The official name is Single Steer Roping, but fans call it Steer Tripping or more commonly Steer Busting, and for a good reason. Because the Rodeo Mafia lies about animal injuries and deaths, we'll never know how many innocent animals have been sacrificed to this incredibly cruel event, but the number is certainly the highest of any rodeo activity.

It is so dangerous in fact that most states ban the event. The PRCA is unable to hold the Steer Roping Finals in Las Vegas with all their other events at the National Finals Rodeo because Nevada bans the activity, calling it too dangerous to the animals. And yet some rodeos continues to hold this 100% optional event. SHARK considers this a pretty clear demonstration of rodeo’s supposed commitment to animal care.

At the 2004 National Steer Busting Finals in Amarillo, Texas, SHARK video-documented nine dead or crippled and likely doomed animals dragged out of the arena. A tenth staggered out while bleeding from the mouth. So much for these phony cowboys' claims of caring about animals. In all the years that we've been investigating steer busting, the results are the same. Death and untold injuries.

Too often a steers have their necks broken during the course of this violent event.

This victim was fatally injured and dragged away at the 2007 Pendleton Round-Up Rodeo. The full video of this brutal act can be seen below.

Read the description of Steer Busting from rodeo people and you'd never know it was a cruel event. That's the way the Rodeo Mafia likes it. The truth is their worst enemy. 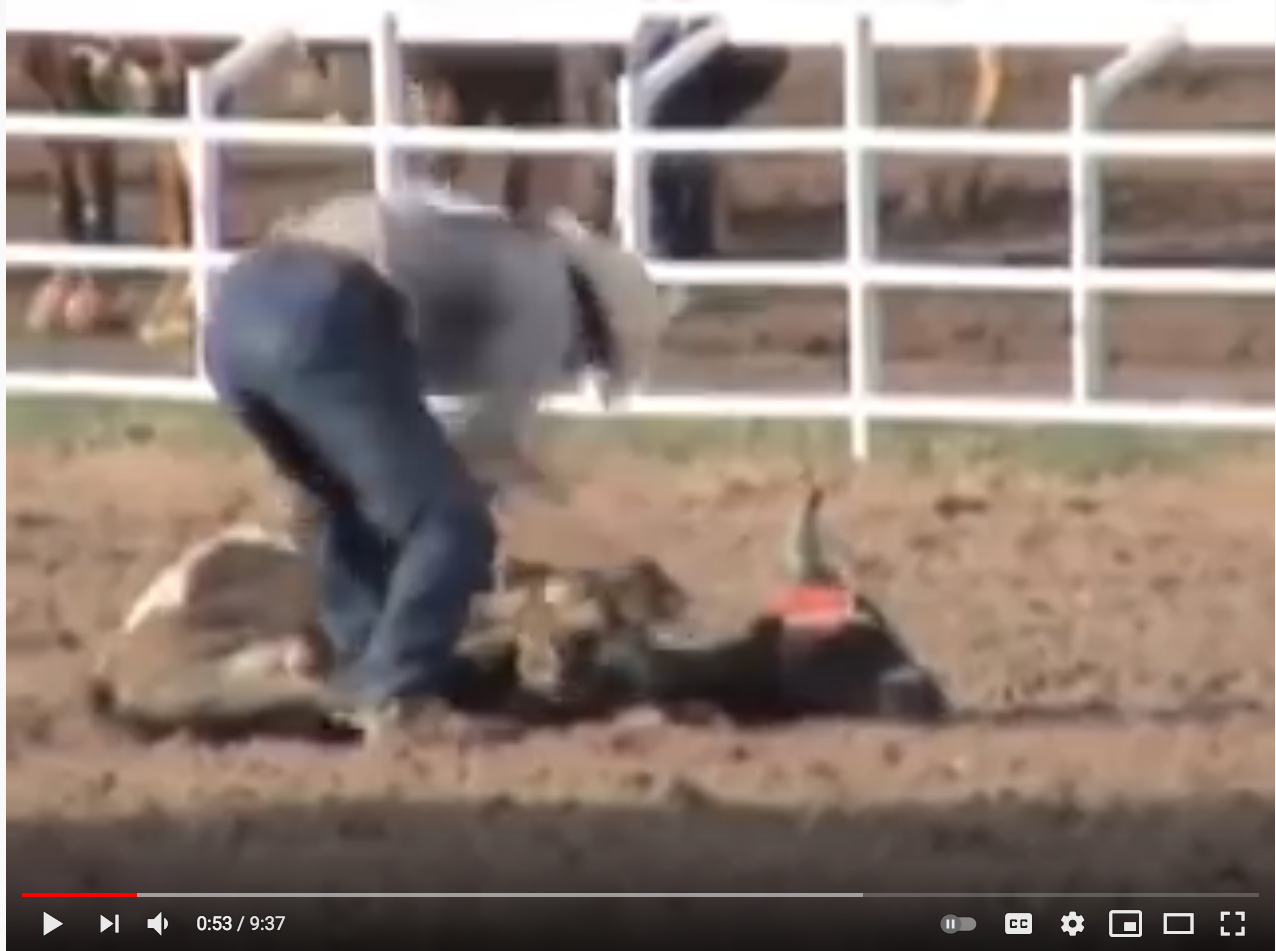 The Professional Rodeo Cowboys Association (PRCA) website explains it this way: "After making the catch, the steer roper tosses the slack rope over the steer's right hip and rides to the left, bringing the steer to the ground. When the steer is lying on its side and the rope is taut, the rider dismounts and runs to tie any three of the steer's legs."

As you will see in the videos below, "bringing the steer down" means to whip a 500-600 pound victim over 180 degrees and slam most victims to the ground with so much speed and force you can hardly imagine how any steer survives. The victim is then dragged to insure it is practically knocked out, so the cruel contestant can get a score, and hopefully, win money.

Steer Roping is so cruel, it isn't even allowed in most states. Of course, that's not what the Rodeo Mafia says. Propaganda on the PRCA website states: "Steer roping is one of professional rodeo's oldest events, but it is held only at select rodeos because of its requirement for large arenas." That is just another rodeo lie.

CLICK HERE to see what the abusers tried to so hard to hide.

Oh, rodeo thugs like to claim that the arena in Las Vegas isn't the correct size for this cruel event, but the fact is that the Nevada State Veterinarian will not allow Steer Busting. In an April 2005 edition of the Colorado Springs Independent, David Thain, Nevada's State Veterinarian, said the event is considered too harmful. Another rodeo lie exposed.

Steer Roping events are usually held in more remote arenas, during the week, and early in the day. The Rodeo Mafia knows better then to allow too many people to see their dirty secret. That is exactly why SHARK investigators, armed with video and still cameras, track down and travel to these hushed-up cruelty contests. Over the years we have documented Steer Busting in just about every state that still allows the event, and everywhere our cameras go we find tormented, injured, and even dead, animals at the hands of these cowardly cowboys. To watch the video from these events, scroll down to the bottom of this page.

The rodeo industry has desperately tried to keep our undercover footage of Steer Busting out of the public's eye. After you view the videos below, please contact and boycott the sponsors of this abuse! 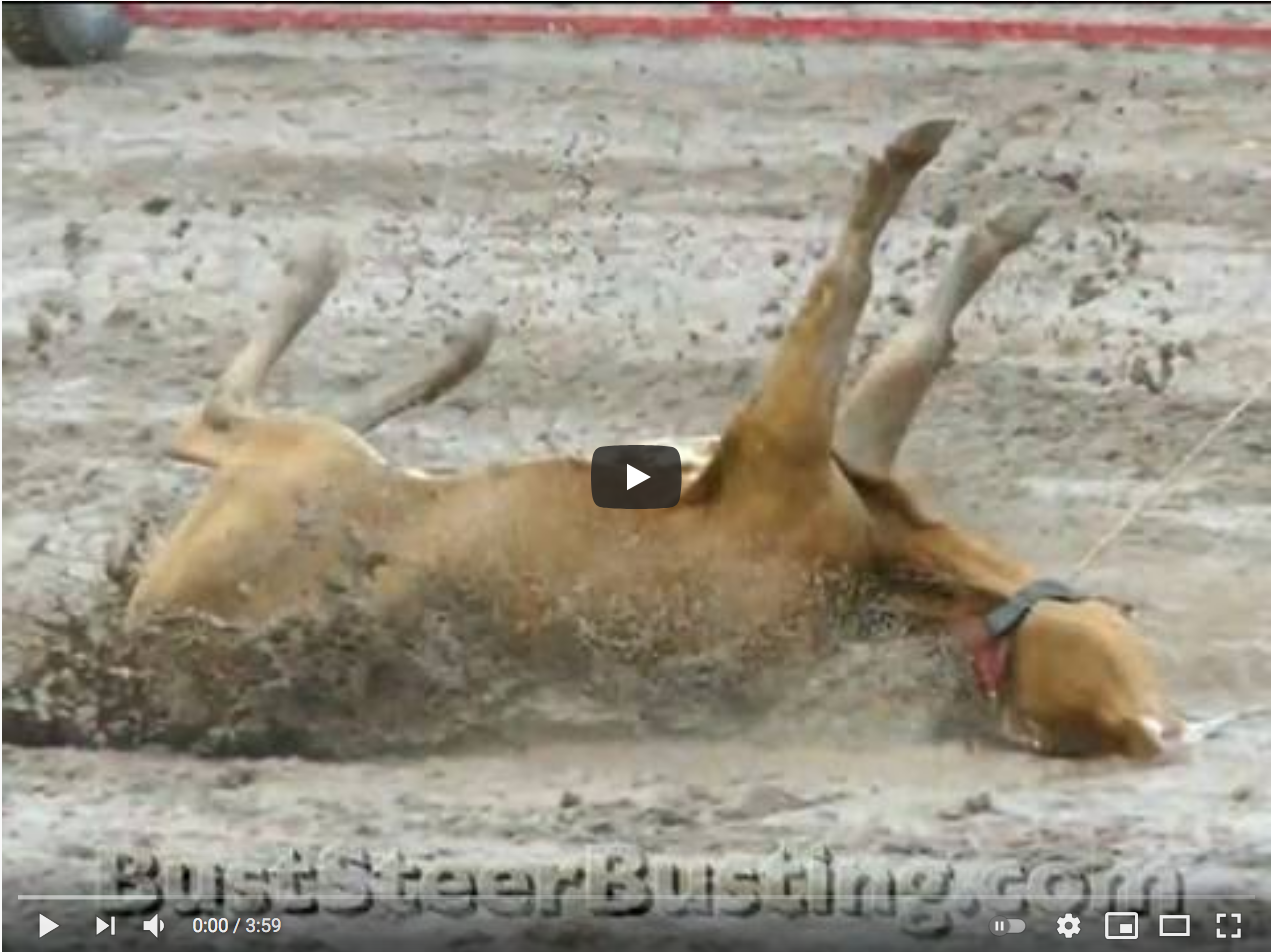 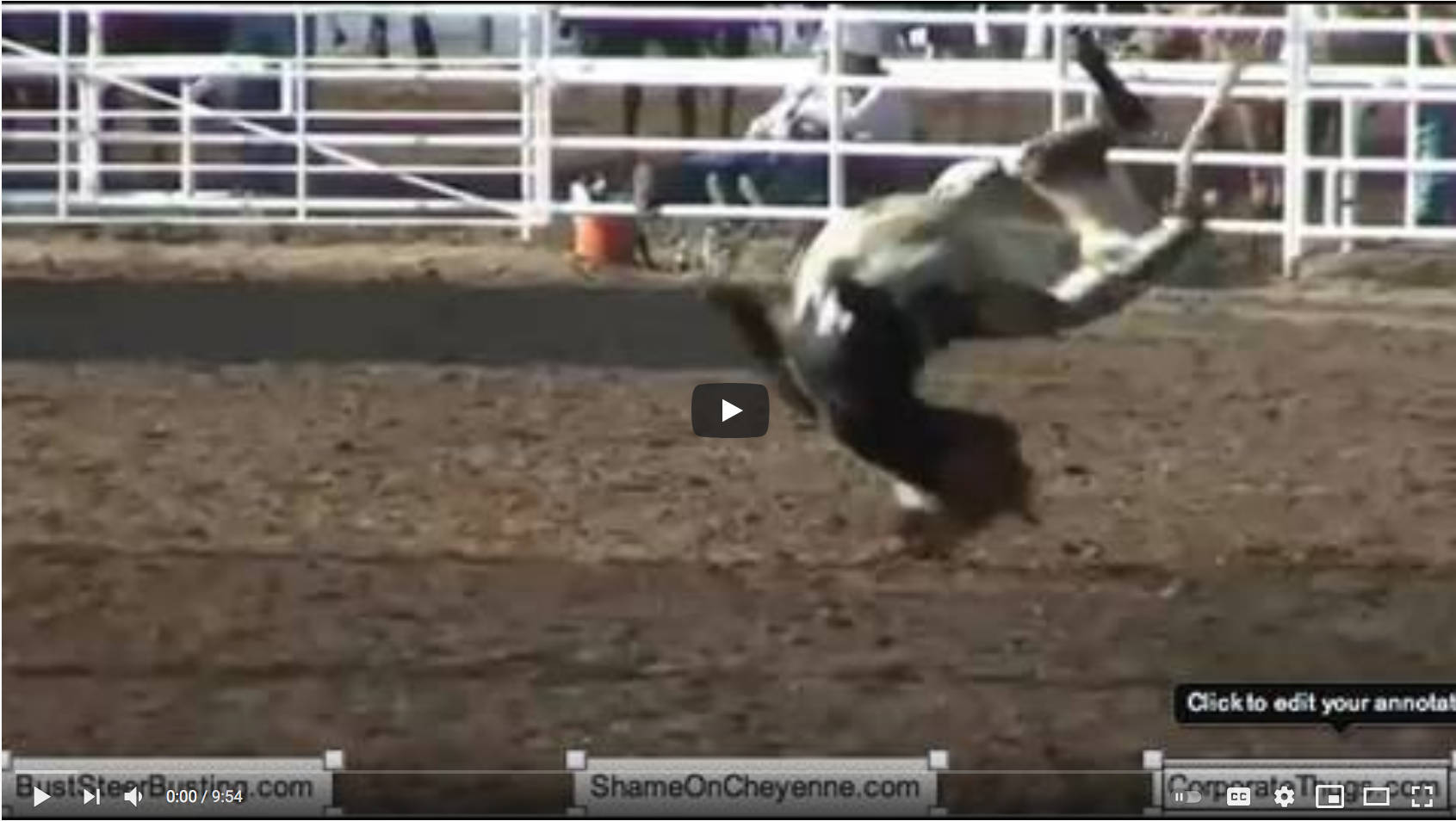 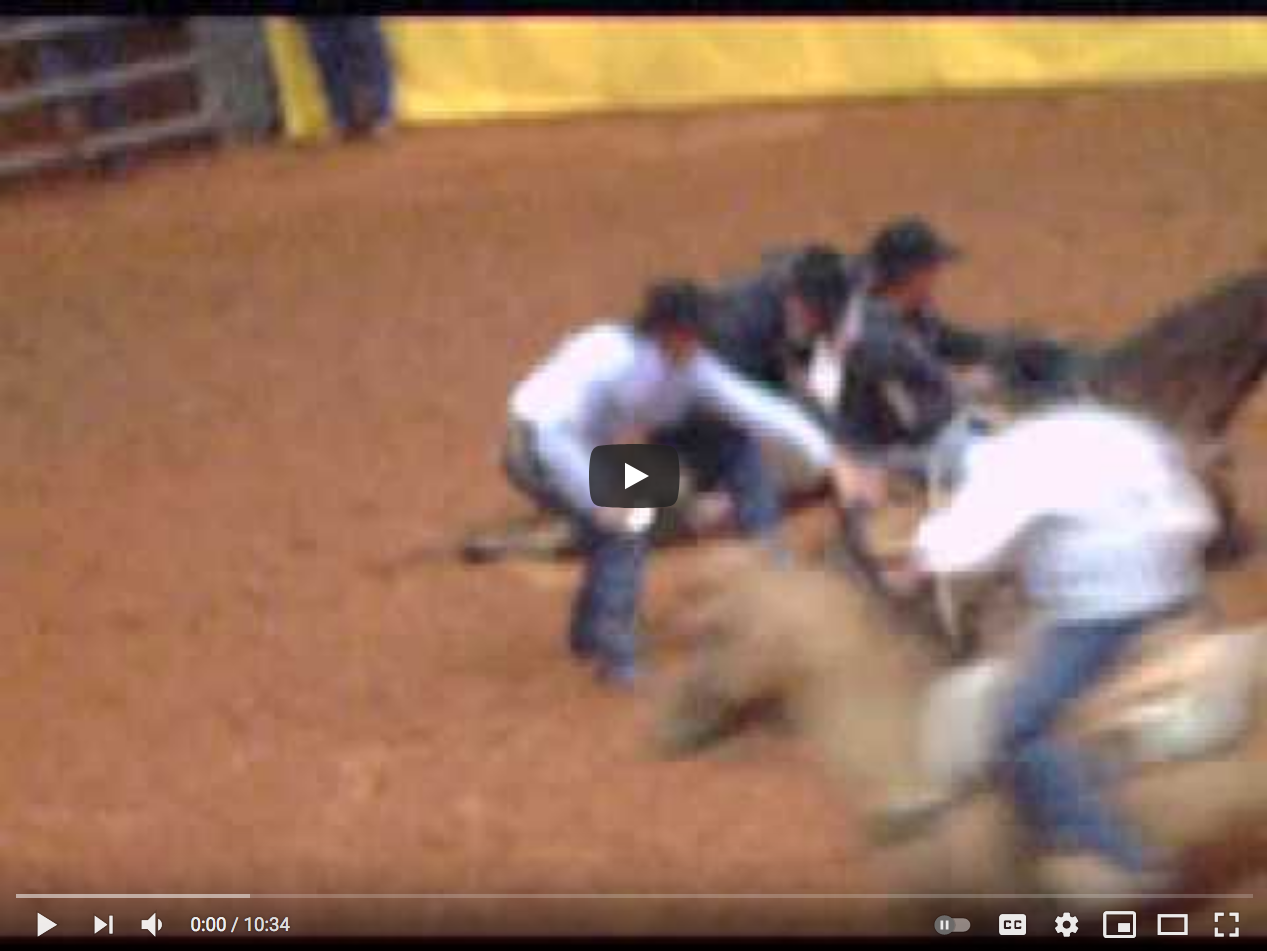 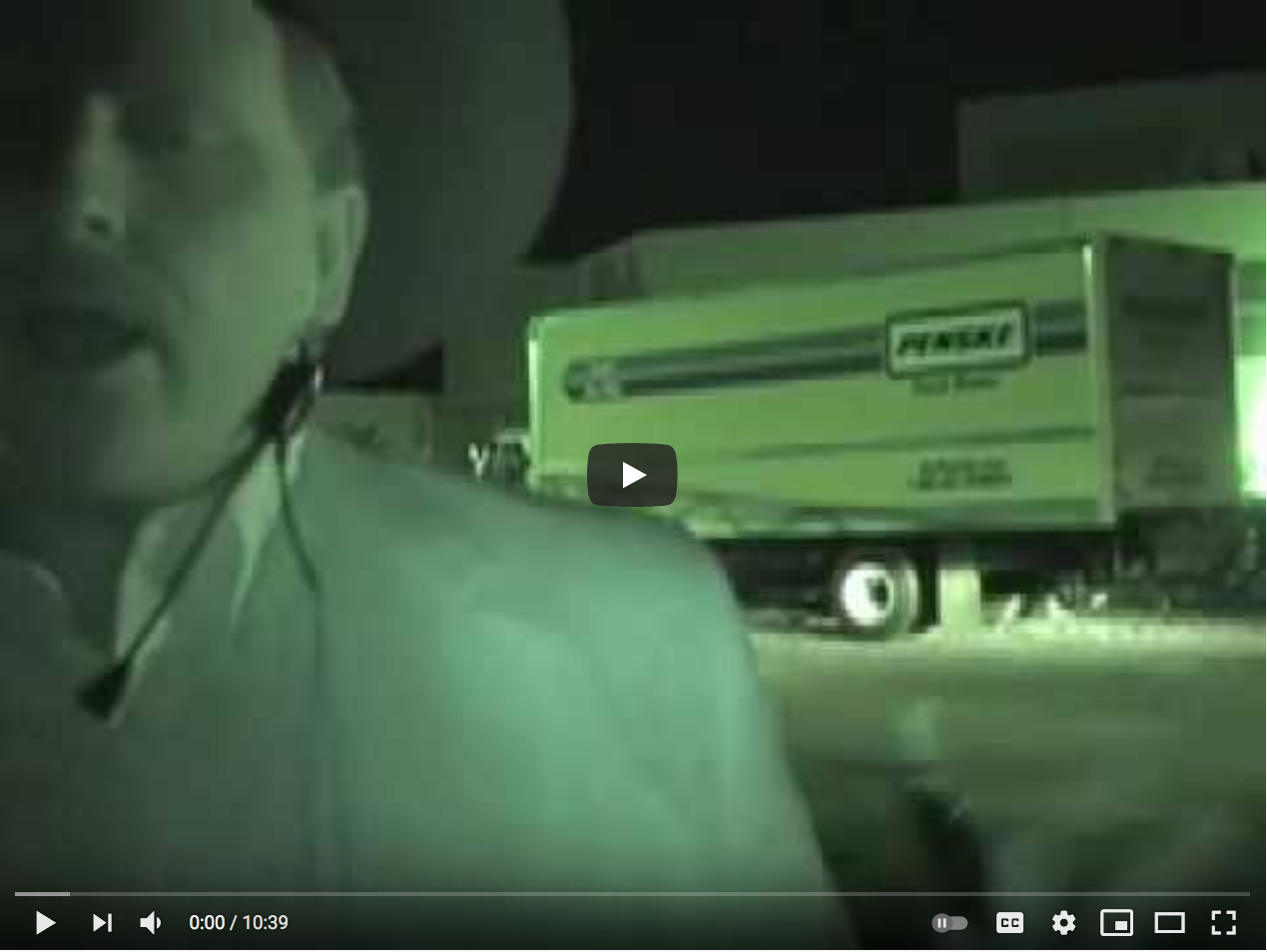 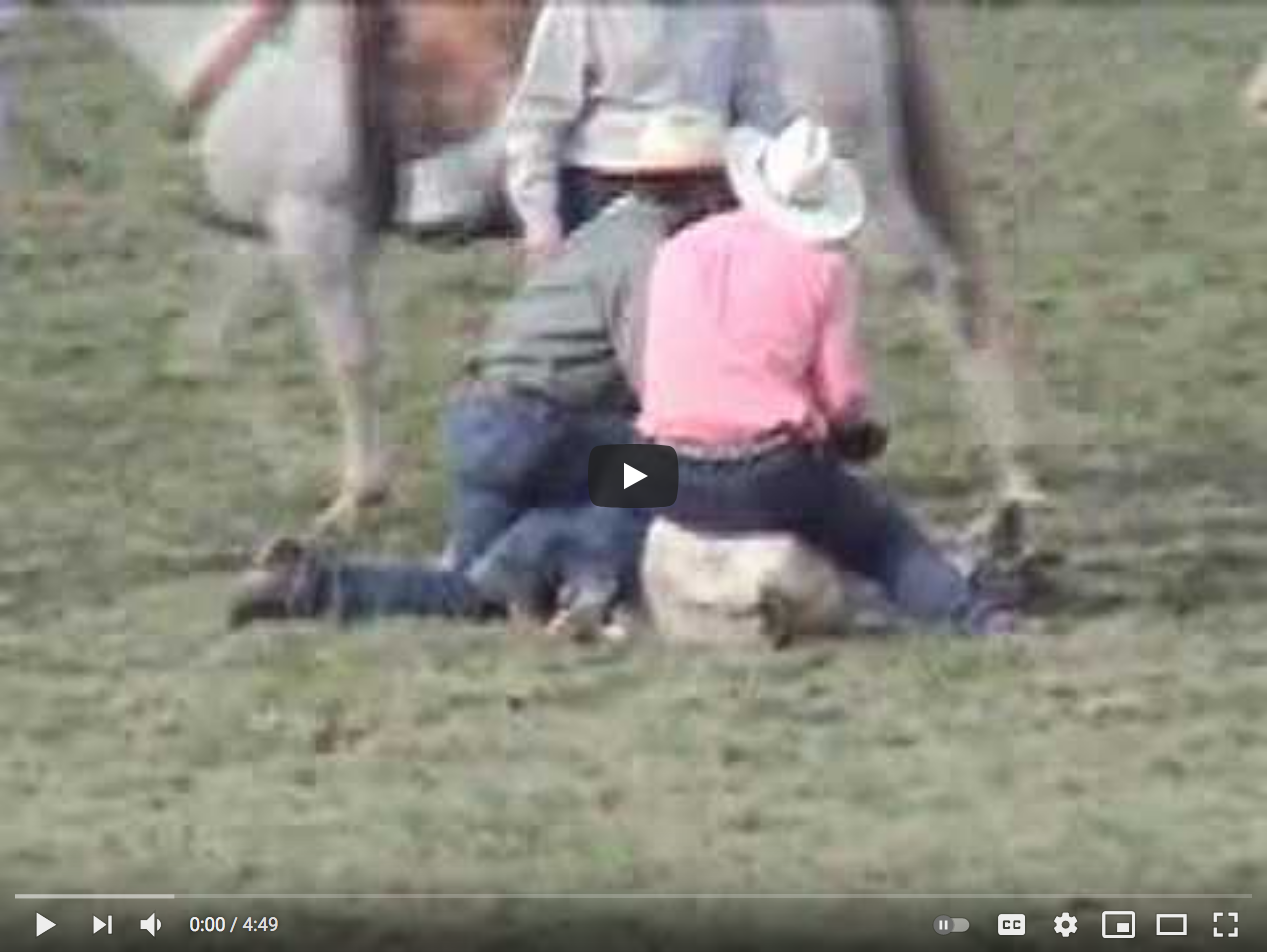 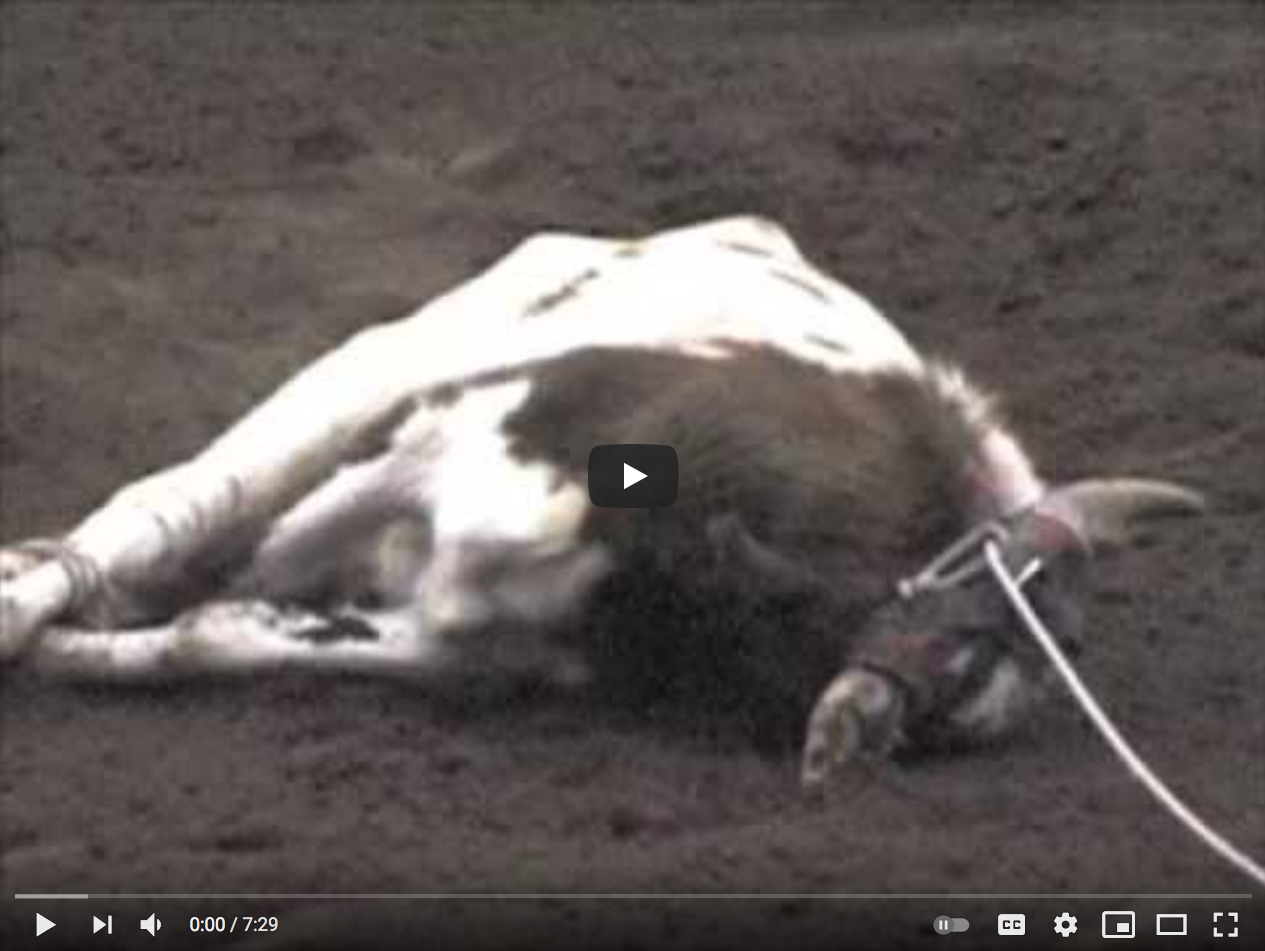 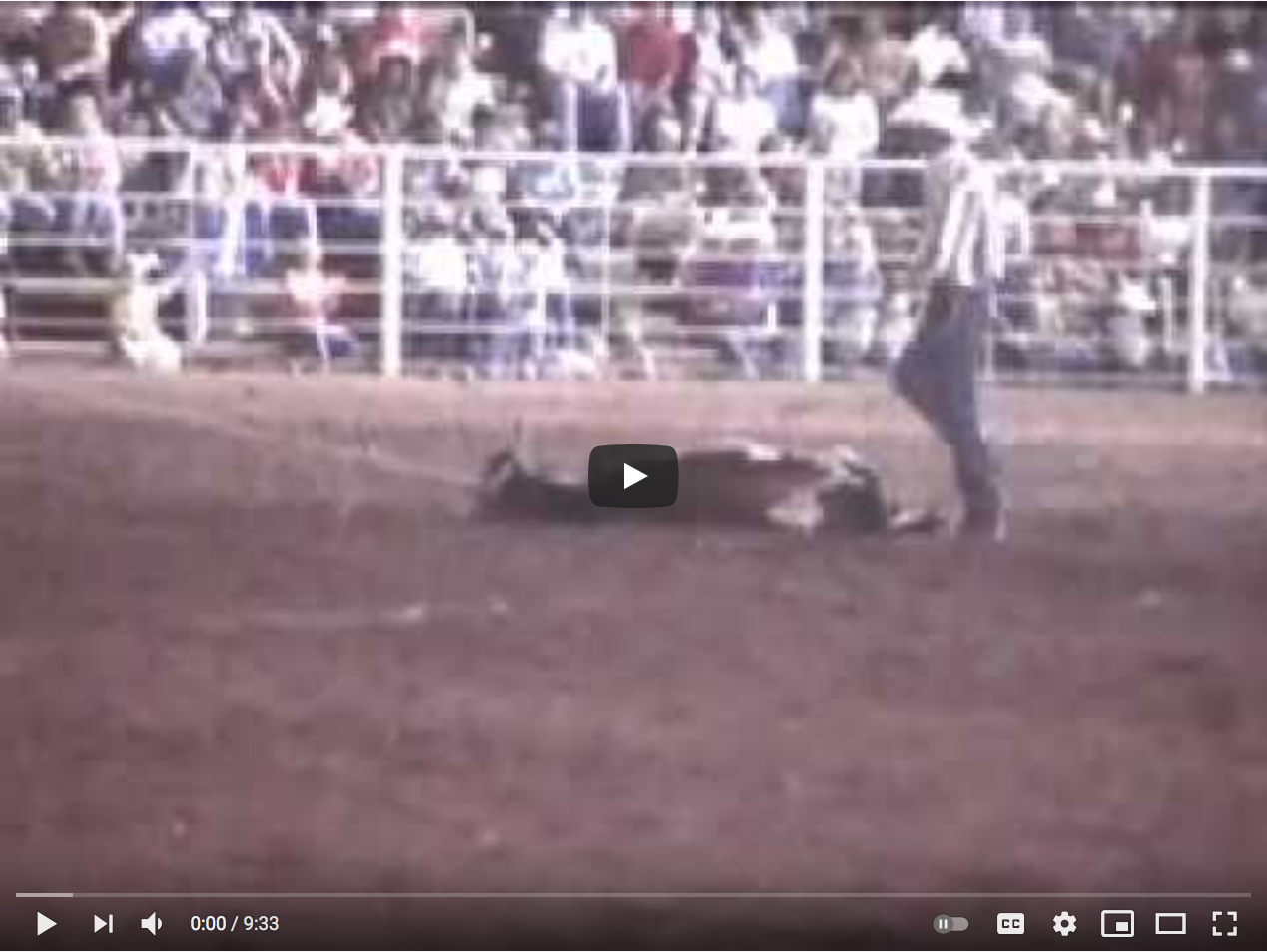 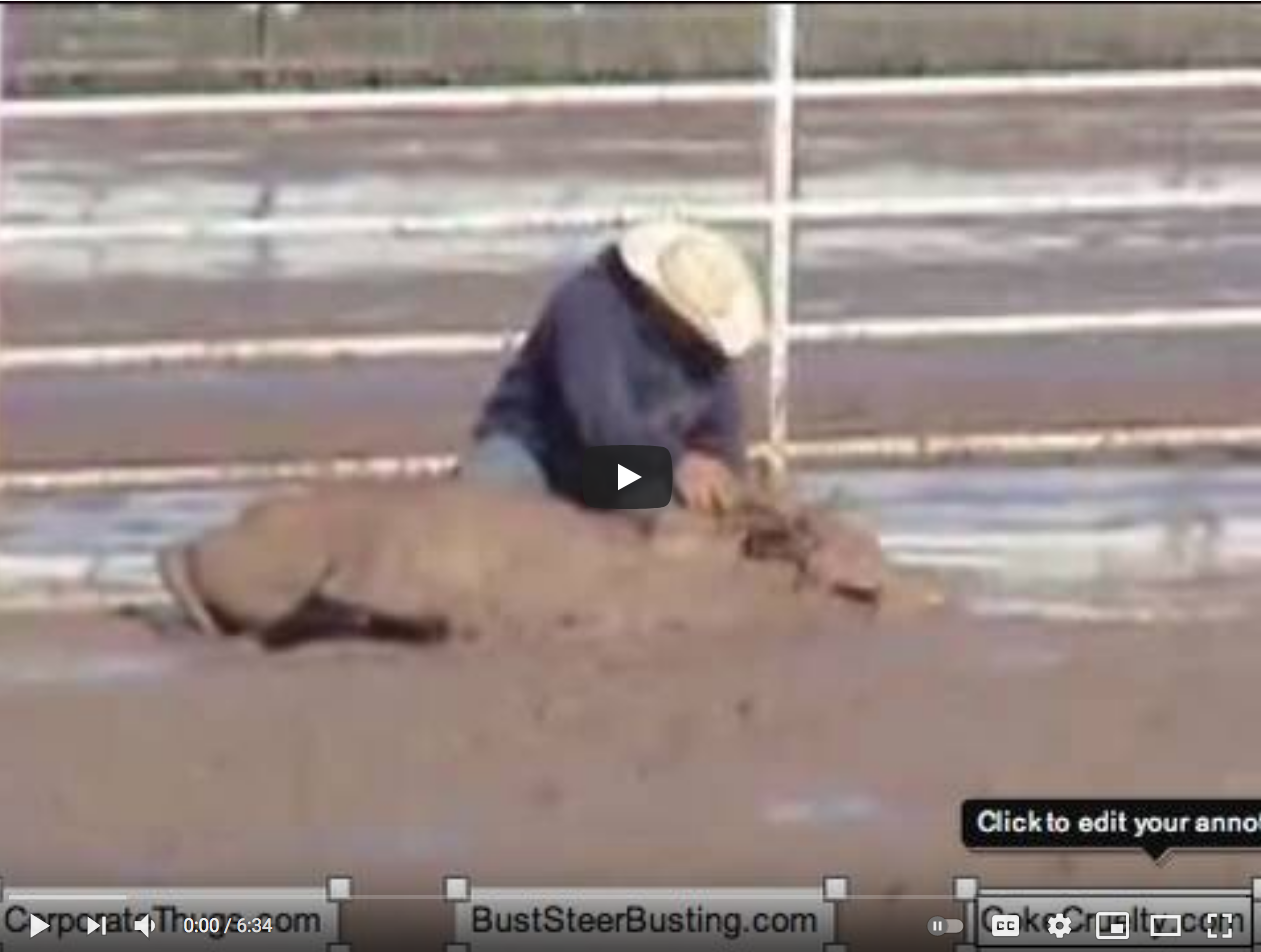 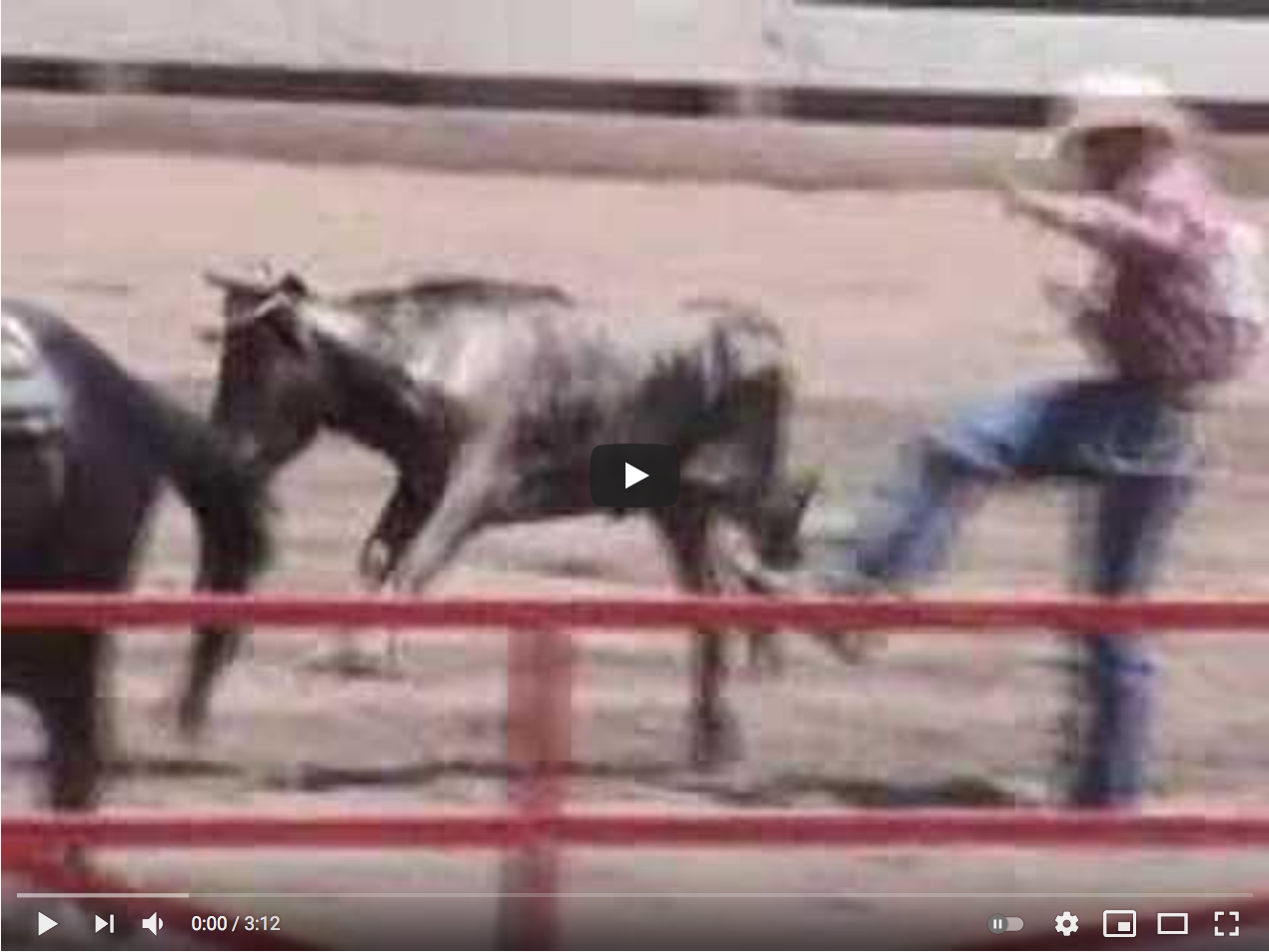