The Electronic Frontier Foundation last week aimed a historically potent weapon -- the spotlight of public shame -- at those corporations and individuals who abuse copyright claims to stifle free speech. 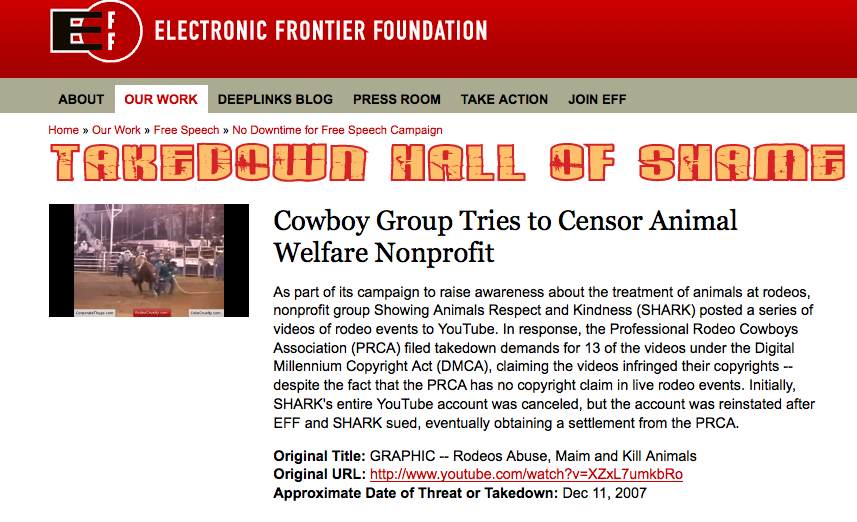 Explains EFF Senior Staff Attorney Corynne McSherry: "Free speech in the 21st century often depends on incorporating video clips and other content from various sources. It's what 'The Daily Show' with Jon Stewart does every night. This is 'fair use' of copyrighted or trademarked material and protected under U.S. law. But that hasn't stopped thin-skinned corporations and others from abusing the legal system to get these new works removed from the Internet. We wanted to document this censorship for all to see."

The organization's "Takedown Hall of Shame" will be updated regularly. Among the first group of inductees are National Public Radio for trying to remove a YouTube video that criticizes same-sex marriage; NBC for targeting an Obama campaign video and CBS for going after one from the McCain campaign. Also "dishonored" are radio blowhard Michael Savage; election bungler Diebold; the endlessly discredited "paranormalist" Uri Geller; and even the Professional Rodeo Cowboys Association, which apparently has donned a black hat on such matters. Who knew?

The Hall of Shame is part of EFF's "No Down Time for Free Speech" campaign.

The organization has been active of late when it comes to launching Web sites that focus on specific issues; for example: TOSBack, which tracks changes in Web site terms of service so that you don't have to; Surveillance Self-Defense, which offers advice on keeping prying eyes off of your electronic information; and, of course, its longstanding and highly effective Patent Busting Project.

They do good work.